12 Days of Christmas Movies! Day 2: Jingle All the Way 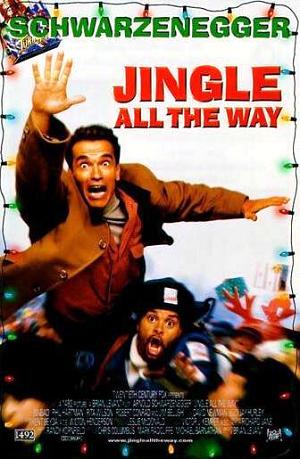 Christmas is officially in full swing, & I thought how fun would it be to do a post a day up to Christmas with a movie recommendation for you? I have some awesome favorites lined up to share, you probably are familiar with a lot of them, but, I hope you discover some new faves, too 🙂

DAY 2: JINGLE ALL THE WAY

Ah, the holidays! A time to celebrate what you have in your life, be joyful, thankful…and, maybe tear your hair out when your child wants the most difficult toy to nab. This happens to businessman, Howard, played by Arnold Schwarzenegger. While Howard has a heart & loves his family dearly, he is a bit too married to his work. So, when his wife asks him, “You got the doll, right?” meaning: The Turbo Man doll, Howard lies & says yes, thinking it will be a snap to obtain the next morning.

The entire city is in an uproar for Turbo Man, & thus, begins the adventures in store for Howard & his new-found buddy, Myron (Sinbad), a smart mouthed mail man, as they both start their journey to get their kids the hottest toy on the market.

From exposing a counterfeit toy ring, breaking into a radio station, finding mail bombs, stealing the neighbors’ gifts under the tree & the grand finale at the city’s parade that finds Howard IN the parade, the laughs are truly non-stop & there are countless moments of awesome, slap stick comedy.

Stay tuned for my pick for your Wednesday! xo