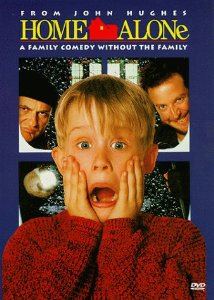 Thanks so much for following along with me as I count down to Christmas with some awesome film ideas for you to enjoy! We’re at last to the weekend & I thought how fun it would be to celebrate that we’re only a WEEK to Christmas, by recommending a double feature Friday 🙂 Enjoy!

Easily the first holiday movie I ever truly loved, Home Alone is from the master mind of John Hughes, King of some of the best teenage films from the 1980’s. Home Alone tells the story of 7-year-old Kevin McCallister, who is feeling drowned out in the middle of countless relatives & cousins in his home as they’re all heading out of Chicago for the holidays & to Paris. After a huge altercation with pizzas & jugs of milk falling all over everywhere, Kevin is sent to the basement to get to bed, with his final words being he hopes to never see any of his family again.

Well, after a storm that leaves the lights out, the McCallister’s awake late & must RACE to make their plane on time. While little Kevin is oblivious, & sleeping soundly in the basement.

Once Kevin awakes to find himself alone, he boasts that, “He made his family disappear!” but, he soon learns he must prove to be the man of the house as there are 2 crooks in the neighborhood, who have set their sights on robbing his home.

Thus, one of the most famous comedic Christmas movies is born. Some even compared Home Alone as an homage to the silent film era, with all of the wild, zany pranks Kevin is able to pull on the crooks.

Will Kevin succeed in bringing the crooks down? Will his family get back to him in time for Christmas? Find out in Home Alone!

Ah, The McCallisters are BACK! This time, looking to put the bad memories of last Christmas behind them, & head to Florida for the holidays! Yet, the evening this time around seems to be getting its start quite similar to last year’s. Kevin & his bully brother, Bud, get into an argument & Kevin is once again sent to bed early…he does make it to the airport this time, though!

Alas, he ends up on the wrong airplane. When he arrives in ‘Florida’, he quickly learns he actually has found himself in New York, & the pranks & schemes he is able to pull this time (like checking into The Plaza Hotel, complete with a cameo from DONALD TRUMP.)

And, to make this the ultimate sequel, guess who have escaped from prison?! The bandits are back & out for revenge on Kevin….he might have them once again, though, as he has a resource i his relatives NYC home! 😉

These are absolute MUSTS for holiday traditions! Enjoy! xo