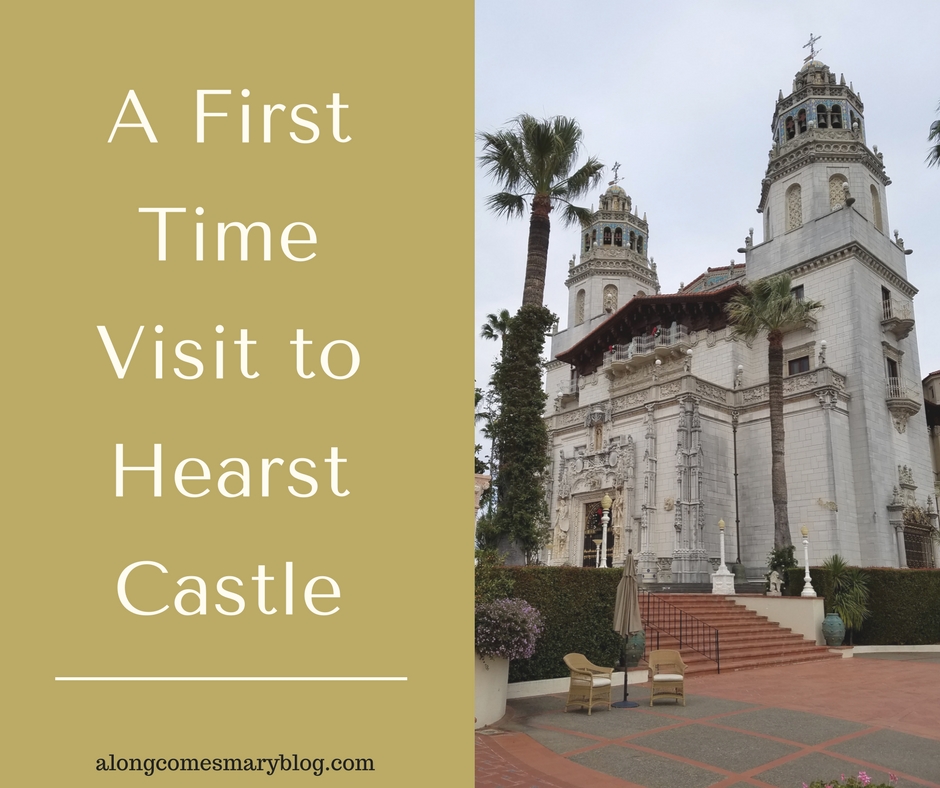 Along on our recent NorCal weekend trek that took us to Thomas Hill and Linn’s, another highlight was my invite to at last visit the Hearst Castle. Being a California native, it’s a bit embarrassing that the castle has been on my to-do list FOREVER. Michael had not been either, and off we headed to the gorgeous San Simeon for our Grand Room Tour.

With each tour lasting about an hour, we were due at 2:20pm. That gave us ample time to enjoy Cambria’s Moon Stone Beach that morning. Nestled in San Simeon, Hearst Castle is about a 30 minute drive from Paso Robles and Cambria. A gorgeous ride over Highway 1 took us to the Visitor’s Center where you not only check in for your tour but, the center also boasts a great cafeteria-dining style cafe, coffee stand, a beautiful boutique as well as their Hearst Castle theatre.

Reminding me a bit of my recent visit to Graceland, your castle tour begins on a bus ride up a stunning winding hill to reach the top of vista where, you guessed it, the castle lays. During our ride up, our guided tour begins with Paso Robles resident and Jeopardy host himself, Alex Trebek, giving visitors a glimpse into the rich history and the depths of William Randolph Hearst and his remarkable empire.

Once we arrived, our Grand Tour quickly began with our insightful and resourceful host. He had a difficult task right out the gate as to explain where the infamous Hearst Castle pool is. It is indeed there, but, well, empty and under construction. The castle’s pool is so famous that he admitted many visitors are led to believe their tour is simply that of the POOL and not much else.

Made legendary (and what many think of when they hear of Hearst Castle) by souvenirs and stock photos, Mr. Hearst was known to simply “patch up” the pool over the years. So much, that major damage had occurred and was causing the grounds to be draining thousands of pounds of water a day. Now that a contractor has been decided by the city, you can rest assured that plans to have the pool restored by this year are under way.

As we moved on, I adored seeing the gardens and some of the guest bungalows where the castle’s staff and help resided. Throughout the grounds, sculptures and art adorn left and right. A very indicator that The Hearst’s were living quite comfortably as they built their home and, ultimately, a museum!

Our Grand Tour highlighted the party and grand rooms of the castle; where the holiday parties were held and the impressive dining room. Immediately, when you enter their grand dining room, you cannot help but have Harry Potter come to mind and, sure enough, the designers from the trilogy themselves visited Hearst Castle for inspiration and even pursued filming there. While the castle was unable to accommodate those Hollywood requests, the essence and looks are nearly un-canny. Hogwarts may just be alive and well on The Central Coast 😉

The Grand Living Room was spectacular. Decked out for Christmas time, each year the castle re-creates just how the Hearst’s had their home sparkle at the holidays…

As our hour concluded, our last stop is an intimate theatre to watch some rare home movies and clips of William Hearst and the family. With all tour admissions, you are also able to watch an hour long film back at The Visitor’s Center.

With the castle as massive as it is, its understandable why their tours are split up into hour tours. Many visitors opt for more than one tour on a visit which can easily be planned. I would definitely recommend this if you are in search of seeing more of the common areas or bedrooms. The Grand Tour is certainly a great first timer’s visit as you get to learn about the pools, the Hearst family and their lavish hosting rooms.

To learn more and plan your visit to The Hearst Castle, mosey on over HERE to learn more! xo