Canyon Theatre Guild Gets Supernatural with Something Strange in Awesometown

(Editor’s Note: While I was in Washington, our newest contributor, Julie Raelyn, headed out to Canyon Theatre Guild to see their production of Something Strange in Awesometown. Read on for her fantastic recap! xo, Mary)

For those who haven’t been to the charming little suburb of Newhall, CA, I have to highly recommend the trip. A short jaunt from central LA, Newhall, near Santa Clarita, is always bursting with arts and history. As Mary mentioned here on this blog in an earlier review, there is a ton of film history, including the Western Walk of Stars, and filming locations of movies from days gone by.

But enough about that. The thing that has always impressed me about Newhall is its absolutely passion-filled theatre community. I don’t recall ever seeing a bad show there, and the talent of the folks that do shows here is infinite. It’s often passed over by folks closer to main LA because of being a little far outside of the LA area, but to see some classic community theatre, without the pretension LA theatres sometimes have, and without the competition, it’s surely the spot.

As I walked into the Canyon Theatre Guild to see the fundraiser performance of Something Strange in Awesometown, the usually cheery glow of the theatre was replaced with a bit eerier lighting, and handwritten, creepy signs warning watchers to beware of “No Man,” and to “Run and Hide.” It was as if I walked into the room belonging to someone chasing ghosts, or perhaps something was trying to warn us all.

My friend and I slipped over to the patio area next to the theatre where they were serving up tasty sandwiches, salads, and cheese trays, included in the ticket price for this fundraiser. Well worth the $15-35 tickets, considering you’d be hard pressed to find dinner alone for that price at some restaurants.

After we’d finished eating, they ushered the sold out crowd into the theatre to begin, and I had no idea the treat (or the spooks) I was in store for. 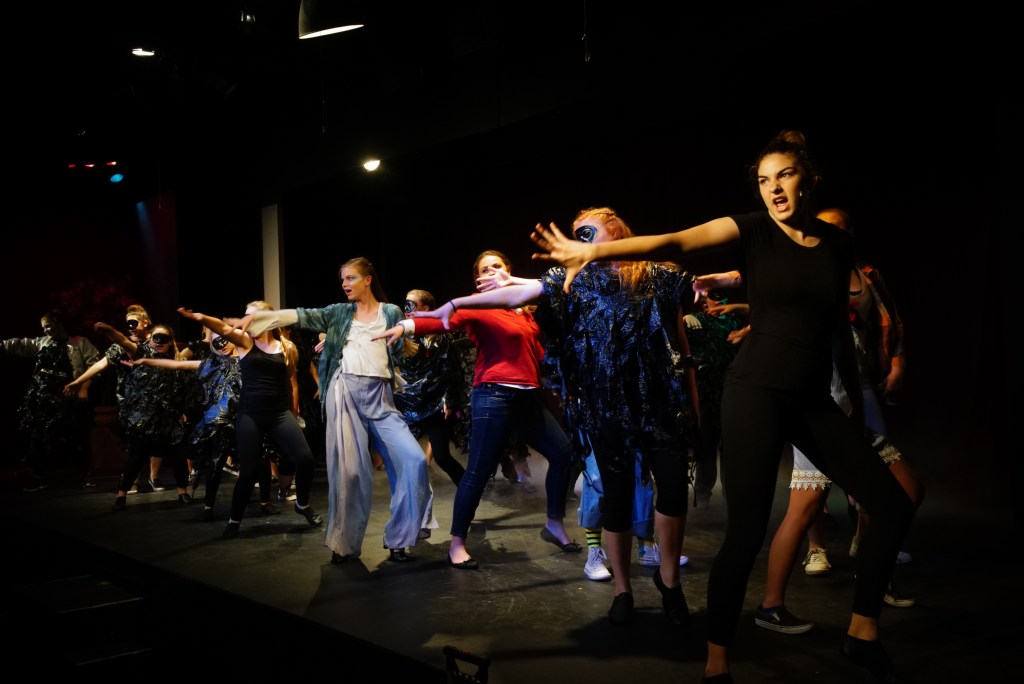 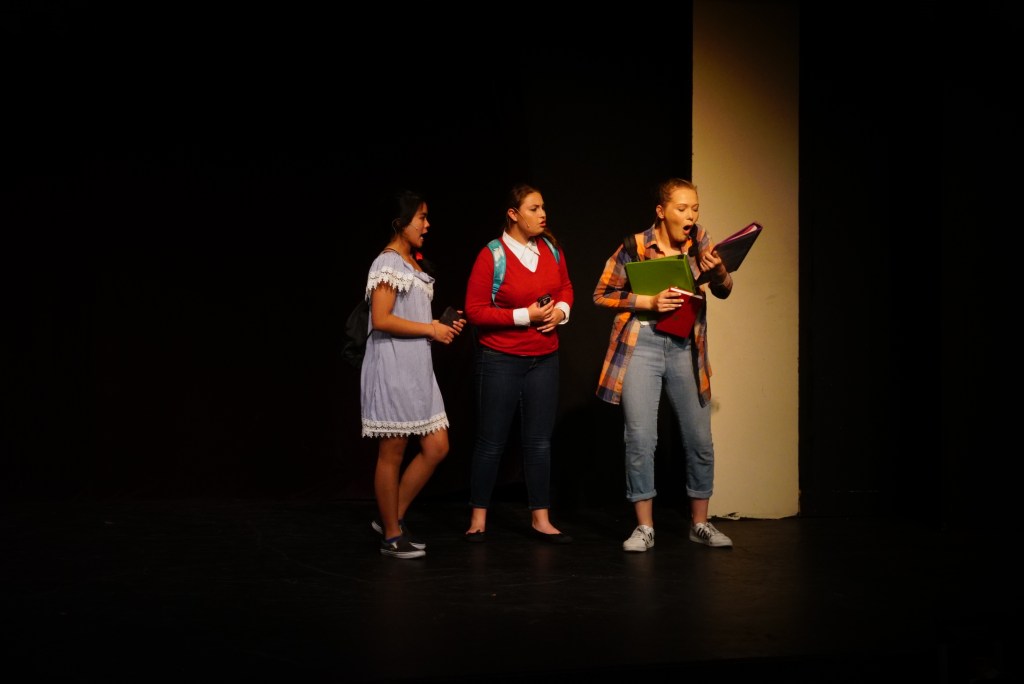 The show begins with some of the high school student characters talking about the legend of the “Radio Girl,” AKA Athena Jones. The setting is right in the Santa Clarita area, aka Awesometown (an actual local nickname that has been around for decades.) This makes some of the local references and jokes really resonate with the audience. The content though, is a 100% original script, written by director John Lucewich, complemented with an array of Jukebox songs, as well as musical interludes between scenes that Lucewich also composed himself. These all help to
set the mood well, and of course maybe even demand a bit of a sing-along.

After the opening soliloquys, we are introduced to Athena as well as some of the creatures who go bump in the night, through scene and song, including an enthusiastically choreographed dance number. Throughout,’we get to see those aforementioned “things” that lurk in Awesometown

Radio Girl, as the character Valerie Harker tells us, is an anything-but-average teenager who has the special ability to talk to ghosts. And oh yeah, she also has telekinesis. She’s basically a superhero. Think of a cross between Eleven from Stranger Things and Dean Winchester.

Athena aka Radio girl is played by Maddie Thompson who handles the lead role with extreme emotional maturity. She is a delicate balance between being the straight man among a host of crazy and colorful characters, and the moody teenager who is learning how to deal with loss. Not to mention the songs Athena sings have the right balance of grittiness you feel the Radio Girl should have and soft melodies to showcase Thompson’s talents. 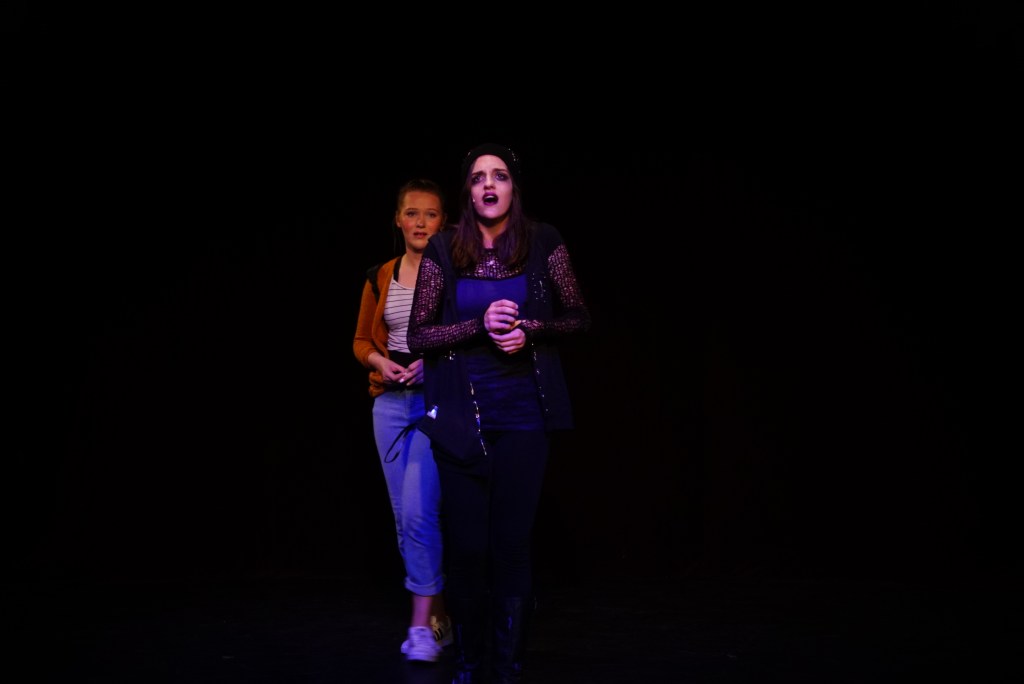 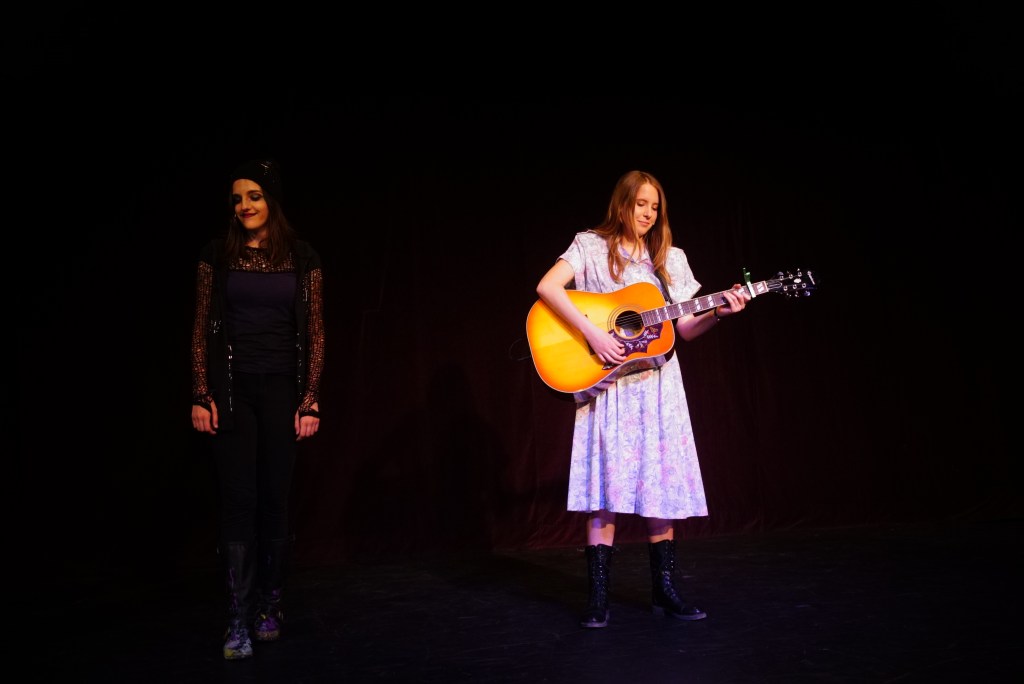 Heidi Parker, as Valerie Harker, does a tremendous job of playing the girl who wouldn’t give up, and who eventually would be best friends with Athena. Valerie has the unfortunate happenstance of following Athena one night, and gets caught up in one of her battles with ghosts. Valerie discovers she can see and hear ghosts like Athena can, and we later find out it is because Athena somehow transferred some of her abilities by opening her emotions during the fight. Parker plays the role as a much needed comedic foil to Athena’s moodiness, and a ton of genuine emotion. Athena gets most of her supernatural information from some fun ghosts from the 80s called “The Paseo Twins,” Alina And Ariana (Gabija Zukauskas, and Ryan Rector, respectively). They run a radio channel only Athena can hear, reporting and “talking the ear off anyone who would listen” about supernatural sightings around Awesometown.

Throughout the first act we catch glimpses of “The No Man,” (played by India Glover) a terrible being that even Athena is not sure of the weight or gravity of at first. She is warned by numerous characters during her nightly fights against the big baddies about No Man, and thus begins the adventure. Glover is poised, ice cold, and emotionless as No Man, giving the right eerie touch to Awessometown’s biggest baddie.

Soon, children at Athena’s school are starting to go missing and through some detective work Maddie and her now motley Scooby Gang of new friends discover that No Man is more than likely behind it. Athena acts like she doesn’t care about her classmates when she’s around them, but you can see that she cares when she is outside of school and she knows it’s her duty to save them, being the only one she knows who has the abilities she does and the experience she does fighting ghosts and demons. 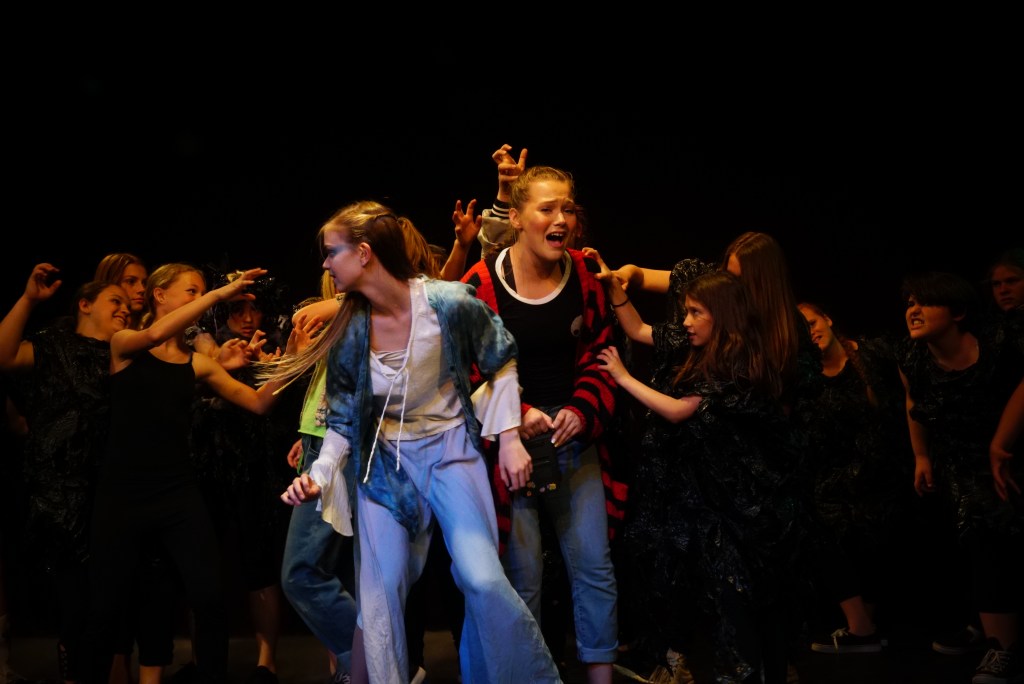 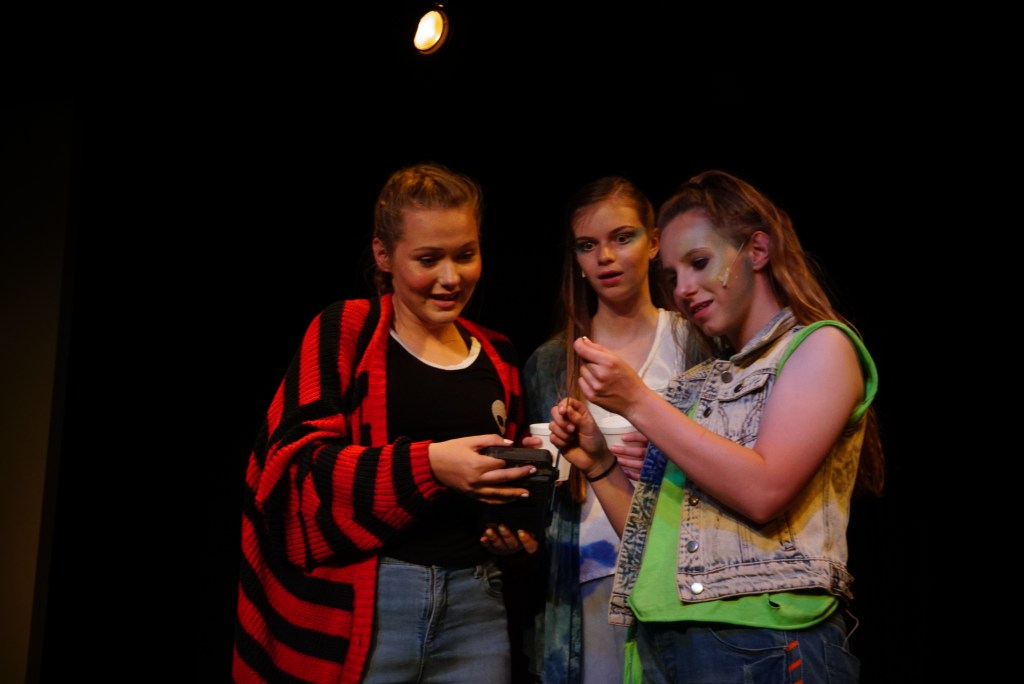 Another fun character is Susan, played by Jessica Schubert. A character reminiscent of Luna Lovegood, and Daryl Hannah in the 80s, Susan introduces herself but doesn’t know what exactly she is. We soon learn she is the daughter of light and darkness, explained through a beautiful song about remembering and some cool scenes introducing us to the different sides of the supernatural realms. Susan joins the gang as they try to decipher what No Man wants and how to defeat them.

Throughout we are introduced to the rest of Athena’s crew, including Alex, a quirky entity that can change her appearance (played dually by Samantha Oakley and Paige Noltemeyer), and a real crowd pleaser of a character called Dancin’ Larry, the dance demon. Played by Cole Carter, Larry is obsessed with fixing bad choreography and making kids “dance to their deaths,” even though he doesn’t really mean to. He just can’t stand badly choreographed numbers. Carter gives humorous life to Larry and clearly has the charisma to charm the audience. His numbers had the whole
audience singing and cheering along with him.

With these new friends by her side, Athena goes on an intense journey through both supernatural places as well as societal, including dying (twice) , facing even more monsters, meeting in the realm of lost souls, helping souls move on, getting asked to prom, and you know, girl stuff, like picking out a dress.

All the while, she needs to figure out how to move on herself, from her parents’ death two years ago. Later in the show we learn that her parents have been hanging out with her the whole time, but they are the only ones she couldn’t see with her gifts. Mainly because (we assume) they were scared she would have even more trouble moving on if she could see them. In one of the more moving parts of the show, her parents finally reveal themselves to her in order to help her let go, so that she is fully ready to face No Man. Athena’s parents are played by Thompson’s actual parents, Linda and Mike Thompson, creating an even more emotional moment with their cameos. 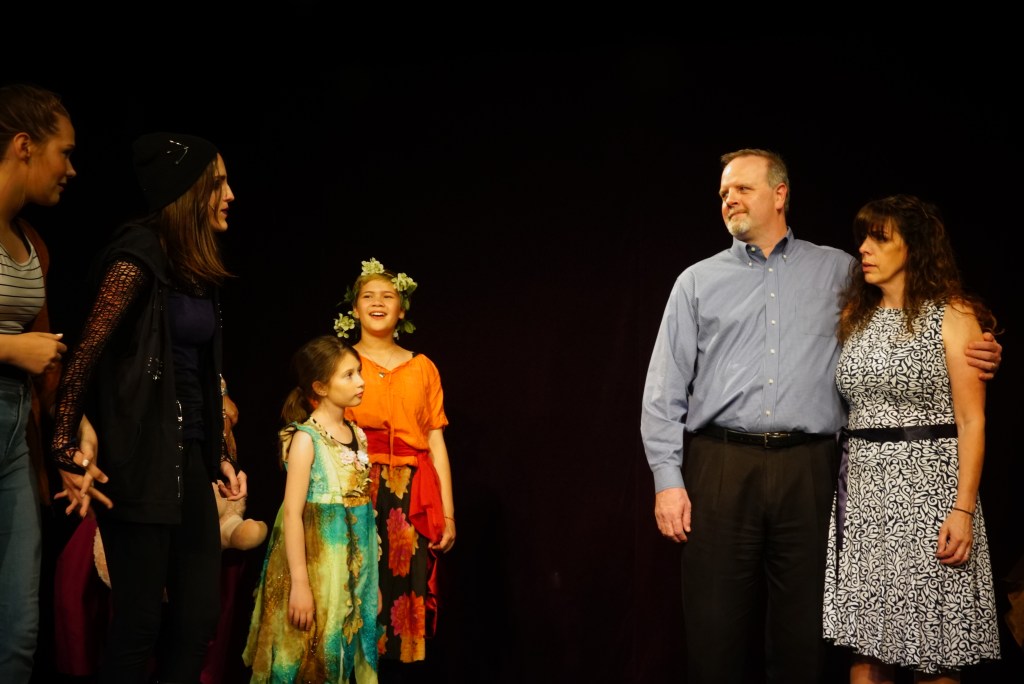 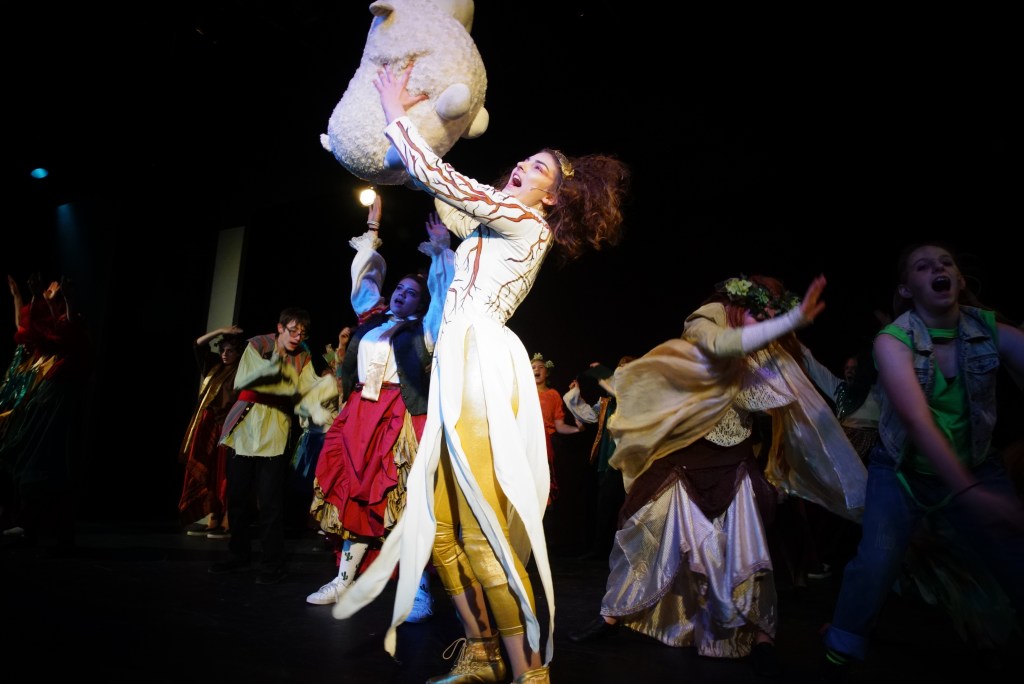 With a cast of 38 kids, and an endless crew of those who helped put it all together, it is too much to mention everyone. But it has been a long time since I’ve seen a show with so much heart. And the fact that it is an original show from Lucewich makes it even better. These kids put an incredible amount of soul and life into the show, and handled roles that I truly believe some adults would have had a hard time with.

As I mentioned earlier the show was a fundraiser for Canyon Theatre Guild. The proceeds will go to help fund the children’s educational workshops the Guild puts on every year, including funding scholarships to attend the workshops for those children who might not otherwise be able to afford it. As someone who has seen firsthand how much theatre means to kids who don’t have other outlets for their creativity, to see them light up the stage for such a great cause was a simply
marvelous experience.

Lucewich, Co-Director Chelsea Jones (who was also the lead costumer) and Choreographer  Lauren Crutcher did an absolutely fantastic job of manning the large cast and crew and creating the magic. The script was well put together and the three months of hard work everyone put into it showed. Having been a fundraiser, the show performed on May 11 and 12th at the Canyon Theatre Guild and sadly won’t have any other performances. But Lucewich has a fantastic show on his hands and I certainly hope that it gets new life through other outlets someday.

The next fundraiser show for Canyon Theatre Guild will take place on November 30th . If you have children of your own interested in theatre, you can send them to the auditions, happening in early September. You can also check out the youth workshops that these fundraisers are supporting, at www.canyontheatre.org, as well as the array of upcoming shows they have.

(Julie Raelyn is a Los Angeles based artist who loves to act, sing, write and make people happy.  Visit her at Goldthunder Productions and make sure to follow her on Twitter and Instagram)

(*All photography by John Lucewich.)