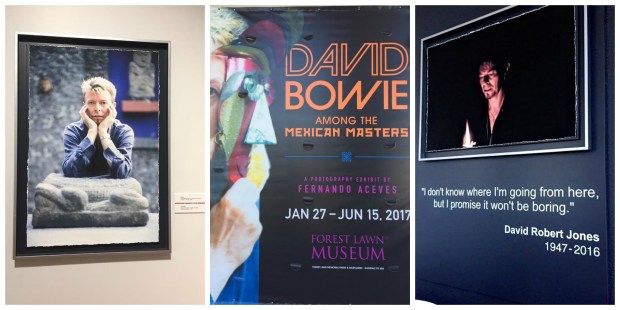 While cemeteries and memorial parks may bring some sort of solace and tranquility to some, most do not look at them as a venue to find beauty and enjoyment. If you take a visit to Forest Lawn Memorial Park in Glendale, be prepared to leave with a new sense of meaning to graveyards. Forest Lawn is unlike any other resting place you have ever visited.

When Melanie from LA Explorer invited me along to the preview of Forest Lawn Museum’s newest exhibit, David Bowie: Among the Mexican Masters, I was instantly in as I love Mr. Ziggy Stardust himself, and knew this would be a fabulous event to be apart of. Yet, what was mainly on my mind was the fact that Forest Lawn has a museum. A museum, at a graveyard?!

Pulling into Forest Lawn off of Glendale Avenue, a friendly face greets you at the drive up information center, and I was shortly given a map to assist me as I headed up a very large and beautiful hill to the top where the museum, church and Hall of the Crucifixion-Resurrection paintings were at.

As someone who has a very strong fear of death, it was humbling and somewhat comforting to be on such a beautiful road covered with world-class sculptures, statues and landscaping all around me. There certainly are moments you may forget for a second just where you are, and then you will be reminded as mourners pass you by. Forest Lawn has created a beautiful atmosphere for the living to enjoy, while still having all due respect to those there to grieve.

When I arrived at the top to the museum, I was taken aback by the views of Los Angeles. They rivaled Griffith Park, if not even better. All of our rain that has helped clear up our California drought  also adds to the fantastic views and clear, blue skies!

Entering their small museum, I was struck by the pieces on display; definitely “quality over quantity”  as I got to see an un-canny Mark Twain sculpture and vibrant stained glass windows.

Boasting a fun gift shoppe, I was my typical self and just had to get something in honor of David Bowie. I grabbed an adorable Ziggy Stardust make-up bag, and word is they will also soon carry Bowie tee’s. 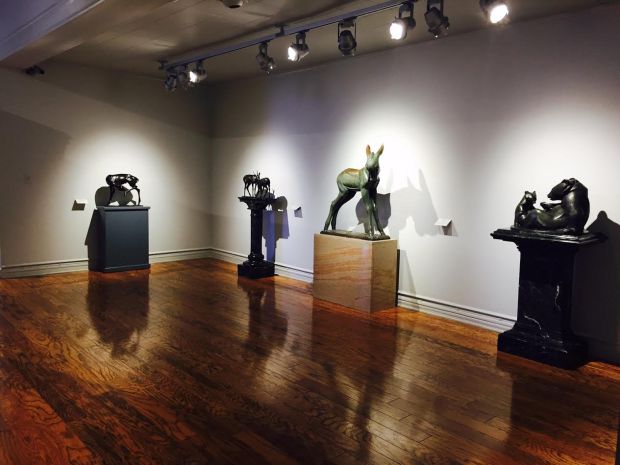 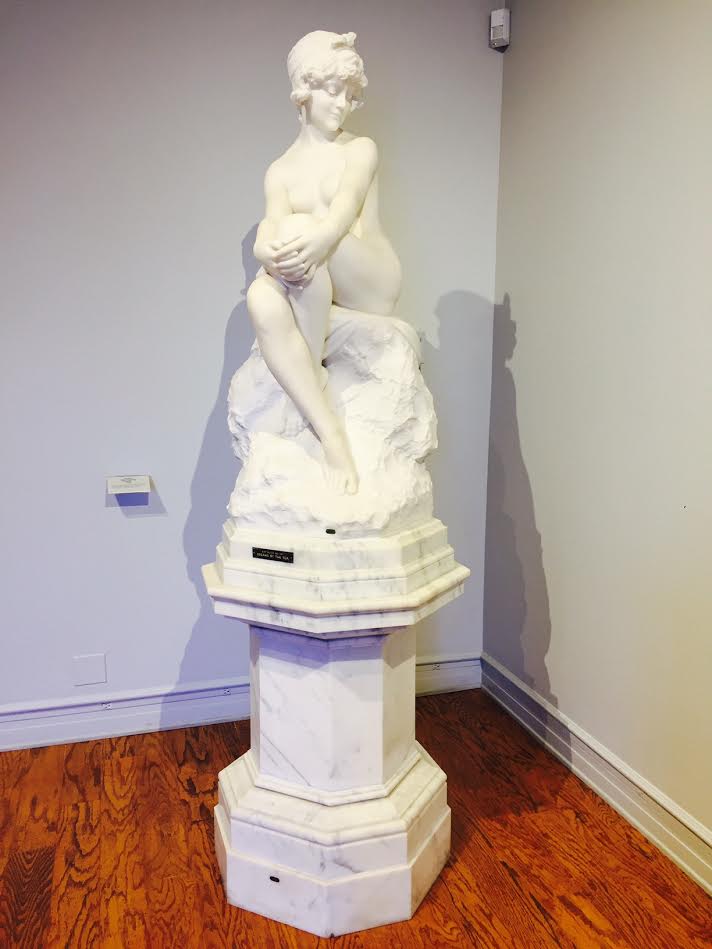 David Bowie: Among the Mexican Masters chronicles Bowie’s first and only time playing in Mexico City 20 years ago. World-renowned rock and jazz photographer, Fernando Aceves, was at one of the legend’s concert in his home base on assignment. When Bowie opened the newspaper the next morning and loved the shots captured from the performance, he gave Aceves a call and invited him to come hang out with him and the tour mates while they were in town to document their visit.

With Aceves on hand at the preview, it was fascinating to get to ask this artist what it was like to hang with another brilliant creator. Affectionately referring to Bowie as “The Guy”, Aceves appreciated getting to know the human behind the legend; While David Bowie was the ultimate Renaissance Man, he was also real, which is what is painfully captured in these photographs; Bowie having fun, sipping his coffee. There was more more behind the creator, in between making music history time and time again. 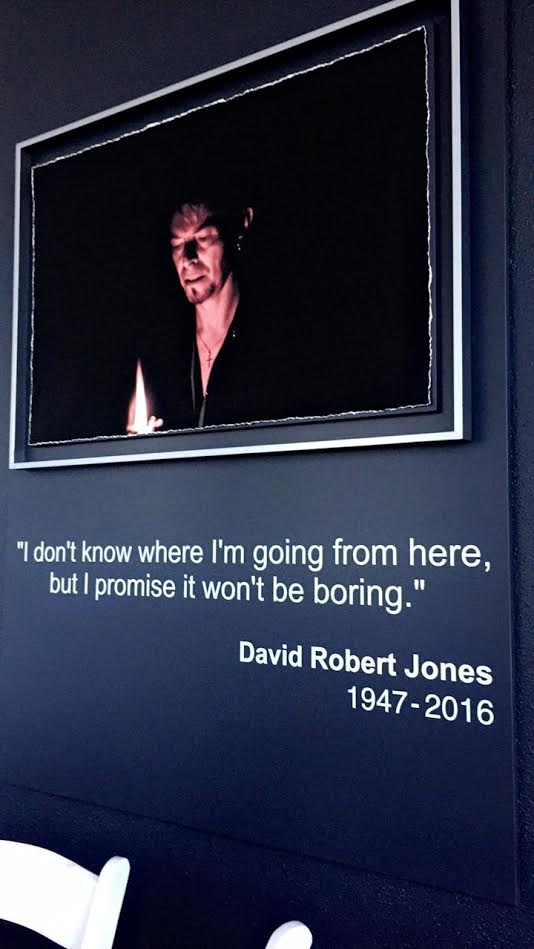 Once these men were acquainted, on Bowie’s agenda was to visit and appreciate some of the most famous landmarks in Mexico City that paid homage to muralists Diego Rivera, David Alfaro Siqueiros and Jose Clemente Orozco, as well as take in the beauty at the Frida Kahlo Museum and the pyramids of Teotihuacan. In Aceves photographs are glimpses in to several of these moments. There are the fun, laid back shots, as well as several showing Bowie in awe as he is, indeed, among the Mexican masters. 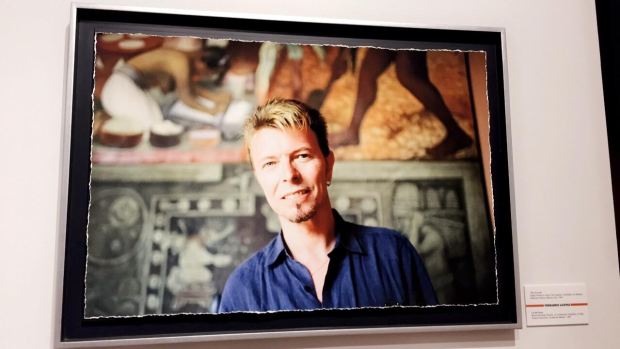 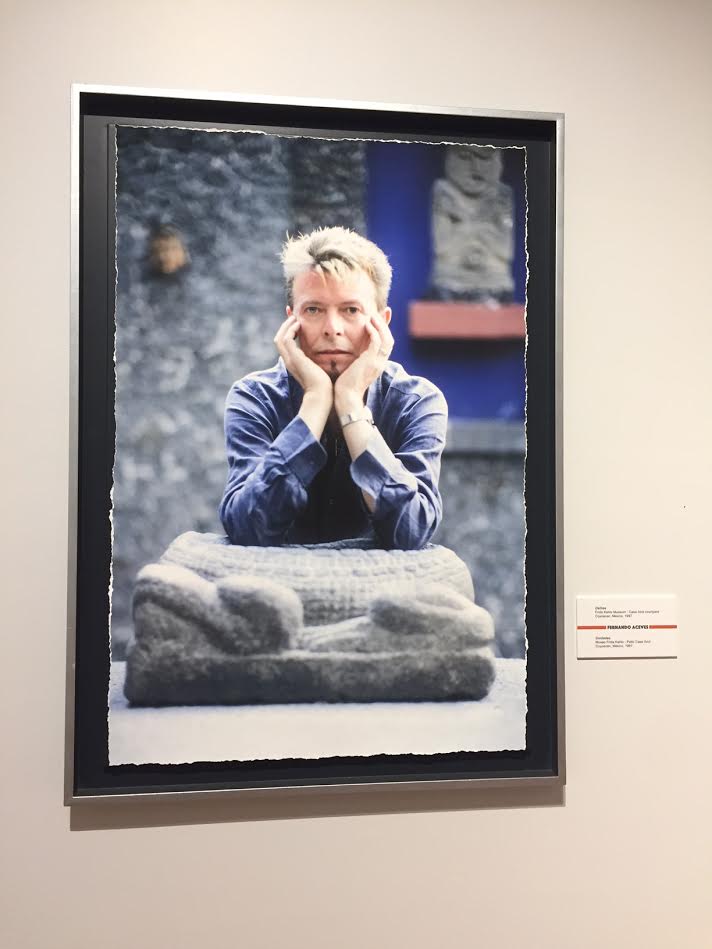 With such a rich history between Mexico and Los Angeles, it is only fitting the the first stop on this exhibition tour is to Forest Lawn. Open daily from 10am to 5pm (excluding Mondays), David Bowie: Aming the Mexican Masters, will proudly be on display until June 1st. Learn more about the exhibit and both Bowie and Aceves, HERE.

And, after you check out the Bowie exhibit, no visit to Glendale’s Forest Lawn is complete without seeing the Hall of the Crucifixion-Resurrection paintings. These are the largest religious paintings in the Western Hemisphere, and this was a moment that left me speechless. On top of the massive size of these paintings, you can imagine my shock when we told that a curtain was hiding more of the art. I was not even seeing its entirety! The building they are housed in was built FOR these paintings, and are displayed in a theatre venue-like setting with a 20 minute video about its process and the paintings, shown throughout the day.

With free admission and parking, it’s no wonder that Yahoo Travel named The Forest Lawn Museum one of the best 10 free museums in the nation.There is something for everyone to see. Learn more and plan your visit HERE.

(*Disclosure: A special thanks to Forest Lawn and LA Explorer for having me at this media event. All opinions are my own.)