From Shakespeare to Baryshnikov, Broad Stage Has it All…

You know how much I love Santa Monica. The beach, posh stores, delicious foods & views. Another thing I just learned graced this city is the amazing theatre, The Broad Stage. Unlike any performance space in the country, it is sublimely intimate with 499-seats and strikingly grand at the same time – allowing eye contact with artists from the boxes to the back row –forging a new kind of artist and audience experience in Los Angeles. Theater shows, dance, film, operas, musicals, symphony and chamber orchestras will be presented on one of the city’s largest proscenium stages.

Under the leadership of Director Dale Franzen and Artistic Chair Dustin Hoffman, The Eli and Edythe Broad Stage at the Santa Monica College Performing Arts Center opened its doors in Santa Monica in October 2008. Inspired by Italian “horseshoe” theaters, yet conceived in an absolutely contemporary vernacular, The Broad Stage is an artist’s dream and an audience’s delight.

Before becoming founding director of The Broad Stage at the Santa Monica College Performing Arts Center, Dale Franzen enjoyed a 20-year career as a celebrated professional opera singer (lyric soprano), performing in the world’s great opera houses and concert halls. Now she devotes her considerable experience as an artist and leader in non-profit administration, arts education and community advocacy to establishing The Broad Stage as a world-class venue for the performing arts and film, as well as a community crossroads of arts education and creative experimentation.

Currently playing to rave reviews & coming down to its final week, A Midsummer Night’s Dream (Video below) finds Bristol Old Vic’s Artistic Director Tom Morris and Cape Town’s Handspring Puppet Company in their first collaboration since the internationally acclaimed War Horse for an inventive new take on Shakespeare’s romantic comedy. A Midsummer Night’s Dream unfurls in the wooded ambiance of The Broad Stage, interweaving the lives of lovers, actors, foes and fairies. Played out on a starkly beautiful set with a brilliant young cast of actors and puppeteers, this is a Dream about love, transformation, survival and song.

Opening on April 24th is a production I am thrilled to be attending, Man in a Case, produced by Baryshnikov Productions. Adapted from two Anton Chekhov short stories, Man In A Case is a pair of haunting love stories – one of an officious, anti-social  man and his involvement with an extroverted woman. The second, a tale of moral ambiguity in which the protagonist forgoes his love for a married woman. Though seemingly different, both are tales of fear trumping the  pursuit of life’s most promising possibilities. Drawing from material as varied as surveillance footage, folk dance, instructional hunting  videos, and interviews with the cast, Man In A Case creates a bridge between our time and that of these 19th-century,  anti-love stories. Annie-B Parson and Paul Lazar, the team behind the  internationally acclaimed Big Dance Theater, bring their signature style – fusing theater, dance, music and video – to this newly distinctive work featuring Mikhail Baryshnikov. 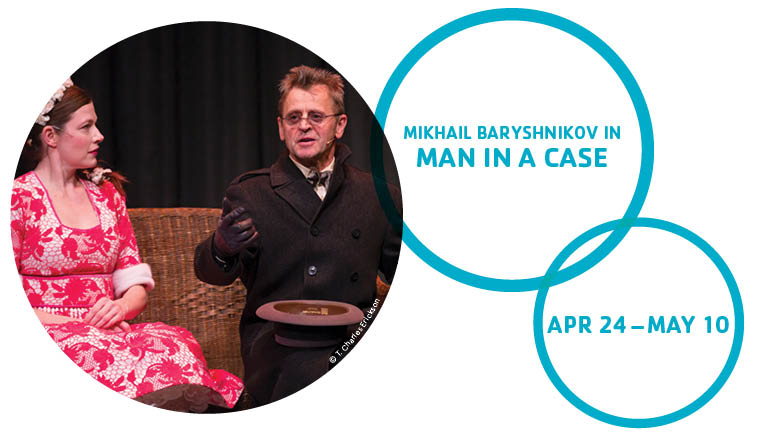 Tickets are selling fast for both of these beautiful plays. To learn more about Broad Stage & get your tickets, visit them here!

(*Disclosure: I am working with Broad Stage & will be at opening night of Man in a Case for review purposes.)