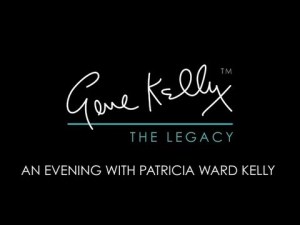 (*Disclosure: I work often with The Pasadena Playhouse.)

The Pasadena Playhouse Theatre is pleased to present GENE KELLY: THE LEGACY  An Evening with Patricia Ward Kelly for two performances only – Saturday, March 1 at 8pm and Sunday, March 2 at 2pm.

Gene Kelly was a joyous performer. A legendary dancer, director and choreographer, he brought astonishing grace, athleticism and masculinity to the big screen. He continues to delight and captivate us, yet we know little about him.

During a unique evening, Patricia Ward Kelly—his widow, biographer and the person who knew him best—presents an intimate portrait of this dynamic and innovative artist who created some of the most memorable and iconic scenes in film history.

Patricia Kelly’s compelling presentation combines rare and familiar film clips, previously unreleased audio recordings, personal memorabilia, and insights culled from her hours of interviews and conversations with her husband. This special live program makes for a remarkable experience praised as “a real treat” by Variety and hailed as “deeply moving” and “mesmerizing.”

Patricia Ward met Gene Kelly in 1985 in Washington, D.C., where she was the writer for a television special about The Smithsonian for which he was the host and narrator. Soon after, he invited her to California to write his memoir. They fell in love, married, and were together until his death in 1996.

“’I never knew that about him. ‘ — that’s one of the most common things I hear from people following my show.  Even the newspaper in Gene’s hometown of Pittsburgh responded with the headline: ‘And we thought we knew Gene Kelly.’” said Patricia Ward Kelly.  “Many people know and love the person they see up on the screen, but few know the many dimensions of the man and his work. They do not know that he was fluent in French, was a Shabbos Goy who spoke Yiddish, studied economics, memorized and wrote poetry, frequently read a book a day, did The New York Times crossword puzzle in ink. That’s one of the things that is most rewarding for me about doing the show—sharing the little lower layers that make Gene come to life for people in new and interesting ways.  Gene was very guarded and revealed little about him in interviews. That he let down his guard and entrusted me with his story was a great privilege.”

She added, “Each time I do the show, I learn new things from the audience and am touched by the personal stories that people share with me when I greet them before and after.  He inspired many; others moved by a particular number or the way it affected them at a certain time in their lives.

Some remember being introduced to Gene’s movies by a parent or grandparent, and, of course, there are many for whom he was a first ‘love’—a crush that, in some cases, has lasted for decades. So, in many ways, the experience is very reciprocal. ““People often ask me if it is difficult to do the show because it is so personal and emotional. In fact, sharing the stories helps to deal with the absence, as Gene remains current and continues to influence new generations.”

“It is an honor to collaborate with The Pasadena Playhouse in presenting GENE KELLY: THE LEGACY, since this historic venue was something that Gene and I shared. I remember particularly going backstage to see our dear friend Barbara Rush after her performance in Steel Magnolias,” said Mrs. Kelly.  “Gene’s roots were in the theater and it was through his work in the plays of his pals Bill Saroyan and John O’Hara that he honed his skills and first began to understand the use of dance to further the plot.”

Currently, Patricia Ward Kelly serves as sole trustee of The Gene Kelly Image Trust and as Creative Director of Gene Kelly: The Legacy, a corporation established to celebrate Kelly’s artistry worldwide. She lives in Los Angeles where she is completing the definitive book about her late husband.

GENE KELLY: THE LEGACY, currently on tour in the U.S. and abroad, premiered at sold-out evenings at The Academy of Motion Picture Arts and Sciences and New York City’s Lincoln Center. More details about GENE KELLY: THE LEGACY can be found at www.GeneKelly.com and at “Gene Kelly The Legacy” on Facebook.

Tickets to GENE KELLY: THE LEGACY An Evening with Patricia Ward Kelly are priced from $15 – $70.  Also, available is a VIP ticket which includes a Preshow Meet & Greet with Mrs. Kelly and a reception for $150.00.  Tickets are available online at PasadenaPlayhouse.org, by calling The Pasadena Playhouse at 626-356-7529 or by visiting The Pasadena Playhouse Box Office, 39 South El Molino Avenue, Pasadena, CA 91101.  For more information, visit www.PasadenaPlayhouse.org.

(*Disclosure: As my readers may know, I do work often with The Pasadena Playhouse for reviews & am always happy to help them get the word out about their excellent shows.)