Hanging Out with Johnny Knoxville!

When I got word that I was going to attend a round table with Jackass’ creator & lead, well, jackass, Johnny Knoxville, I was thrilled since I absolutely loved him in 2013’s Bad Grandpa & while not an avid follower, am definitely no stranger to Mtv’s Jackass. Granted Knoxville’s out of this world, zany, don’t-try-this-at-home persona, I did not know what to expect from him yet figured he would be a wild, loud guy. The reality? Knoxville was nothing short of calm, humble, chatty & unassuming.

The occasion that brought upon this round table was to speak with Knoxville about his new documentary, Being Evel, telling the life & marvelous times of daredevil Icon, Evel Knievel. A childhood hero of Knoxville, Being Evel, which premiered earlier this year at The Sundance Film Festival, tells the story of Evel Knieval & all his insane wild man attempts, including his infamous 1967 attempt at Vegas’ Caesar’s Palace to jump the  casino’s famed fountains, “in my mind” Knoxville said at Bartel’s Harley Davidson Center in Marina Del Rey last week, “(that is) one of the most famous pieces of footage of all time.”  “He was as big as Elvis, Evel was IT for me as a kid”, Knoxville added, as he wiped off his unmistakable black rimmed glasses. 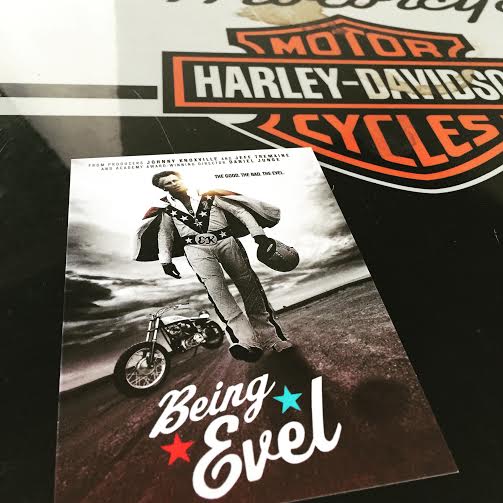 Since I am not too acquainted with Knieval, I did what any reporter does prior to such an important assignment: I googled him. I was interested to learn that Knieval had a set of “core values” he tried to follow both professionally & personally, so, I asked Knoxville if he has any he tries to stick to, as well. Knoxville listed the obvious: Treat people how you want to be treated. Be a good person. But, his exception? none of these values apply to his Jackass family! 😉

In Being Evel, viewers are treated to some of his best stunt clips, his rise to fame & rare interviews with his family, which, for Knoxville, were the most vital in making this film: Hearing from Knieval’s family, which, unfortunately, was anything but a Norman Rockwell setting: “Some parts of his life are unfortunate”, Knoxville said, “I’m very conflicted now with Evel, because I’m still that little kid when it comes to him” referring to a childhood hero that can do no wrong, yet, as we get older, we discover that we’re ALL human. 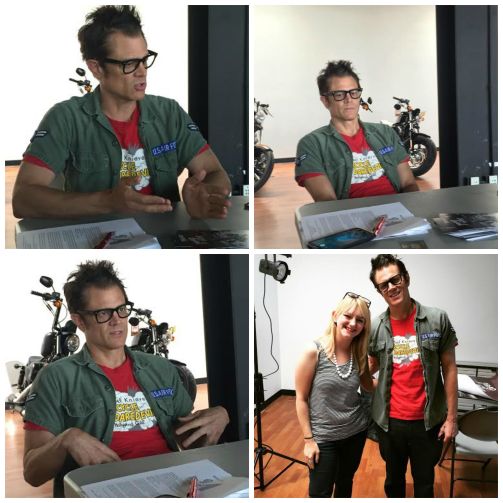 Which made me inquire about The Knoxville Clan, Johnny has 3 children of his own so of course I wondered if they want to be anything like their Dad? “The girls are smart, they know better. But, we’re going to have problems with my son!” Apparently, 5-year-old Rocko thinks he is quite the stunt man & they’re going to have to keep him guarded! My recommendation to Knoxville? He should make a sequel to Bad Grandpa & make Rocko the grandson! While Knoxville definitely had a moment of intrigue, he was quick to add that it would be tough to top Jackson Nicoll, who was fantastic as Billy in Bad Grandpa & apparently, fearless & ready to do anything for the camera!

Being Evel is now playing in select theatres nationwide, & stay tuned for more from Knoxville & the Jackass crew as another project is in the works. What did Knoxville have to say about whats next? “It’s gonna hurt”! 😉

Special thanks to Johnny Knoxville for speaking with us!