The Judge in Theatres Today!

Psst, you know what? I think I’ve caught the bug. Yeah, that one that’s been going around for quite a while that mostly women seem to be catching. It comes on quick for some, like after seeing The Iron Man Trilogy or Sherlock Holmes. For me? I think I officially got the bug yesterday, after a wonderful time previewing The Judge.

Yep, I am referring to the Robert Downey Jr. bug! While I’ve always enjoyed his films, & Mike got me into the awesome-ness that is Iron Man, Downey has truly pulled out all the stops with his newest project, in theatres today, THE JUDGE. Which solidifies how versatile Downey is, able to go from comedic moments to intense, powerful scenes, all in a matter of minutes.

The movie finds Hank Palmer (Robert Downey Jr.), a successful lawyer who seems to have it all…yet his family is falling apart as he’s facing a divorce & he gets a call that his Mom has passed, forcing him to return to his hometown in a small, close-knit community in Indiana. There, we meet the father hes estranged from, The Honorable Judge Joe Palmer (Robert Duvall). Joe has always felt Hank is the troublemaker, the rebel, uncontrollable son of the family of 3 boys, despite the fact Hank graduated first in his class from law school & has made quite the name for himself. 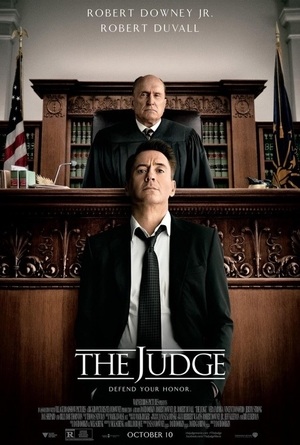 We soon learn, that The Judge has battled alcoholism & seems to be off the wagon now that he has lost his wife…among other turmoil in this old man’s life we later discover. Little do The Palmer Boys know that a trip their father takes to the convenient store for eggs, will forever turn their lives upside down. As bad blood lays between Joe & a local man just out of prison for drowning a girl years back, the following morning the boys learn that man is dead, & their father is the lead suspect.

As Hank packs his bags to return home, he ends up staying to support his dad & serve as his defender against prosecutor Dwight Dickham (played to perfection by Billy Bob Thornton). As pieces unravel & more heartbreaking skeletons make their way out of the closet, this murder trial just might somehow bring this father & son back together, stronger. But, the road will not be easy.

There is not one weak performance among this cast. One that blew me away was Vera Farmiga as Samantha, Hank’s high school flame who still hasn’t lost hope to rekindle what they had. Farmiga was so convincing in her role that I had no idea it was indeed her til mid way through the movie. I’ve loved Robert Duvall since he portrayed Boo Radley in 1962’s To Kill A Mockingbird. He is raw as The Judge yet stuck up,  righteous & vulnerable, all at once.
Robert Downey Jr. as Hank nails it as his father’s son. Trying so hard to be his own person, at heart, he wants his family to get along & to be accepted. The Judge has ‘Oscar’ written all over it & is destined to be the drama darling of the season by critics & audiences alike.

Following my screening, we were treated to a wonderful opportunity: A talkback with Producer, Susan Downey, who, yes, also happens to be Robert’s wife! Looking gorgeous & rocking her pregnant belly, I was interested to ask Susan how her & her husband balance the life that is Husband/Wife & Powerhouse Producers, “You don’t” was her initial answer to me, which raised many giggles. She went onto say that it’s actually a beautiful thing since they’re both in the business & not only do they collaborate, but, they get it. They both understand the demands of making films, together. It was also mentioned that she once said when she first met Robert, she thought he was weird. She still stands by it! But says that’s what keeps them together.

All I could keep thinking was, How does she handle knowing that millions of women wish they were in her shoes? Married & expecting another baby with The Iron Man?! 😉

A huge thanks to The Moms for this opportunity, & check your listings for The Judge playing near you!