Kiss Me, Kate at The Pasadena Playhouse!

The Pasadena Playhouse has kicked off their 2014-15 season with a wonderful fresh, new take on Cole Porter’s classic musical, Kiss Me, Kate. With The Playhouse always breathing new life into classics, Kiss Me, Kate finds the cast led by some of the most talented African-American actors in the business & from Broadway. 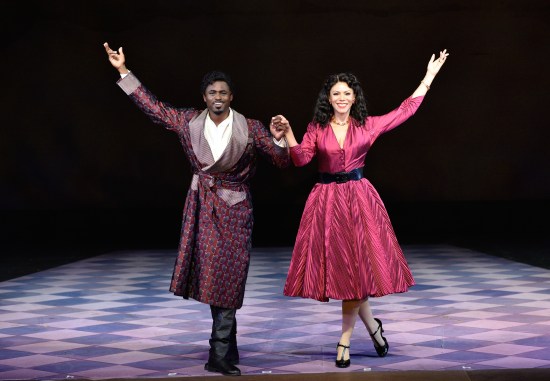 Its 1948 in Baltimore, & entertainer, Fred Graham (Wayne Brady), is producing a musical version of Shakespeare’s Taming of the Shrew appropriately titled Kiss Me, Kate. He’s enlisted his hot-headed, stubborn ex-wife, diva Lilli Vanessi (Merle Dandridge), to play opposite his Petruchio. Between the stress of premiering a show, dealing with his ex and being extra friendly to his supporting actress, the ditzy, loose Lois (Joanna A. Jones), Fred definitely has his hands full…he also is unaware that Lois’ gambling, con man beau, Bill (Played the evening by understudy, Eric B. Anthony), has just signed Fred’s name for an IOU of $10,000 in a craps game! 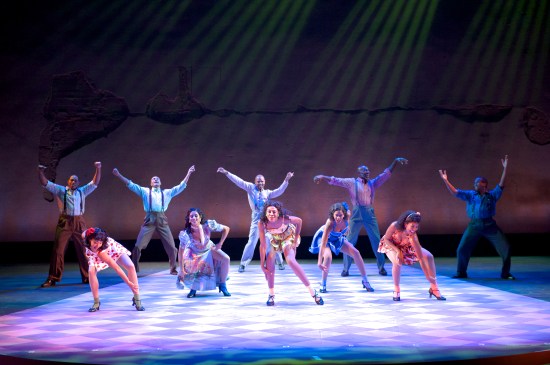 Multiple Emmy Award winner, Wayne Brady, shines as Fred. Having known Brady’s work from Whose Line is it Anyway, The Wayne Brady Show & Lets Make A Deal, I have often thought how talented he is; having no idea he is also a triple threat on stage. His voice is as smooth as honey as he shines his way on duets with Dandridge like Wunderbar, then brings the house down on solo numbers such as, one of my favorites, Where is the Life that Late I Led?
While Dandridge (Who is gorgeous & resembles Kerry Washington) has a beautiful, strong voice, especially on one of my favorite show tune songs, So In-Love, I had a difficult time sensing any genuine chemistry between Fred to her Lilli. 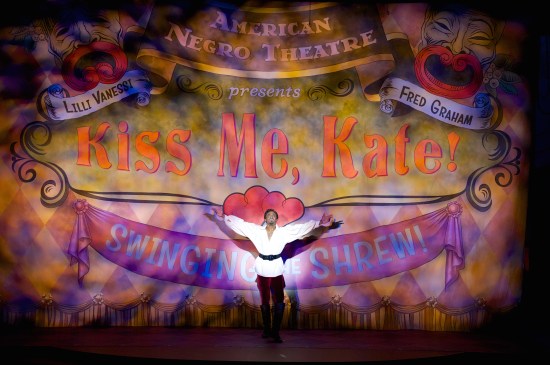 Joanna A. Jones is also a threat to be reckoned with. She lights up the stage every moment she is in. She had the perfect blend of the flighty, opportunist with a heart of gold & you truly felt like she means every lyric in her hilarious powerhouse solo, I’m Always True to you in My Fashion, as well as Tom, Harry or Dick. Eric B. Anthony was superb, as well, as Bill/Lucentio & the crowd was loving his highlight moments in his number, Bianca. 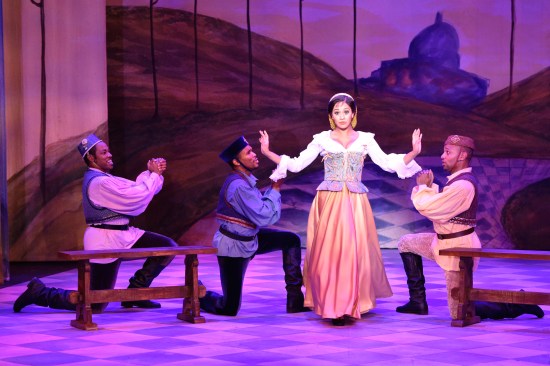 Having seen Kate before, I knew that there is a well-loved sidekick duo (a la Nicely Nicely & Benny Southstreet in Guys & Dolls) that always has the crowd screaming for more; Thug #1 & Thug #2. With Fred’s name signed to Bill’s IOU, these thugs show up at Freds dressing room, looking for their dough. Clueless & believing their fans, Fred is dumbfounded til he decides to use these men in his favor; have them hold Lilli hostage to the show, since she has announced she is leaving. Towards the end of the final act, David Kirk Grant (Thug #1) & Brad Blaisdell (Thug #2), realized they have learned a clever way to woo the ladies & sing us what they discovered in the favorite song, Brush Up Your Shakespeare.

Kiss Me, Kate is proof once again that The Pasadena Playhouse continues to be one of my favorite venues to see live theatre at. They do not mess around & couldn’t have chosen a better man than Wayne Brady to lead this magnificent cast. Kiss Me, Kate, plays through October 12th & is the perfect way to head out for the evening for a date or family night (Side note: While I feel this is an overall family friendly show, there are some very subtle sexual innuendos & the use of the word, Bastard, in the musical). Tickets are selling out fast so book yours now by heading over to The Pasadena Playhouse’s web-site HERE! xo

(*Disclosure: Special thank you to The Playhouse for the Press tickets provided on behalf of this review. All opinions are my own.)