Becca Moore may be from France, but her heart is clearly right here in Sunny SoCal California. “Joni Mitchell summed up my feelings about moving here quite perfectly in her song ‘California'” Becca tells me, “I was once that girl, who, ‘sitting in a park in Paris, France’ was finding it ‘too old and cold and settled in its ways’. I felt that Los Angeles was a place where I could heal and grow as a person and artist, and join a community of conscience people who would understand me.” Identified as an “Activist Singer”, Moore is fast making a name for herself in the indie music world, & rightly so; she is an incredibly gifted artist well beyond her music, which is enough to make her worth watching.

After winning her first singing competition by flooring the crowds of her hometown at age 4, Becca became an acclaimed soloist on the French classical music scene and in church choirs. She also applied herself in school, despite the storms she faced at home, and ended up graduating first in her class from the prestigious English and American Literature Masters program at Paris VII University. She later formed her first all-star quintet and toured in Paris and eventually New York. Back in France, the storyteller in Becca realized which way to go to take her art to the next level: West again, but this time all the way to Hollywood.

With definite funk & soul vibes, I was anxious to learn more about Moore’s vast influences;  “I was raised on classical, singing a lot of Bach, Vivaldi, Mozart and all kinds of religious music, including American Gospel.”  She explains, “Then I heard Billie Holiday and Ella Fitzgerald on a CD I got for free at a gas station in my early teens, and they became my new idols. But that’s not surprising, I guess! I was also a huge Madonna fan as a child, I’ve always loved the music of Queen, and I did listen to my fair share of The Clash, Supertramp, and most of all Serge Gainsbourg, a genius French singer and songwriter who wrote some of the most beautiful and inspiring French tunes of the 20th century.

When she applied for a green card, granted for extraordinary ability in the arts, Becca worked in the industry quickly, translating dialogue into French for numerous TV shows, including “Mad Men” and “Nurse Jackie.” Right now, she is focusing on her brilliant projects: her musical TV drama series entitled “Soultown Super”, which tells the story of Ray, a building manager extraordinaire born in a Black ghetto, who is intent on shaking off the burden of history, while uplifting the microcosm of society that lives under his roof into an urban oasis. Becca recently completed this first pilot script and is now working on a second project, a half-hour musical dramedy series entitled “Off the Rez.”

“Broadway is still fascinating to me,” she begins to elaborate on after I inquire for more about these unique ventures with television & theatre; “What I’m working on now is a different and new type of ‘subtle musical’ that is not meant for the stage but written as a TV series, and offers one original song per episode, a tune that is both inspired by and written for the episode. (with) ‘Off The Rez’, it is the second concept for a musical TV series that I have come up with, and it will require a lot of research before I can complete the pilot script, which I intend to co-write with a Native artist. Both shows aim to entertain and enlighten at the same time, and reaffirm through fiction and music that Native and Black lives matter, and that America has the power to heal and grow out of its racist, sexist and violent history. I am really encouraged by the choices Netflix has made recently with (their) smart shows that get into some issues in a wonderfully addictive manner. Both my TV projects are still in the early phases of creation, but if I had to choose where you’ll be able to watch them, I would say Netflix, Amazon, Showtime or HBO.” 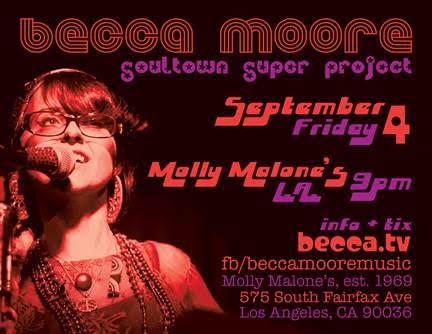 And, giggling more about her California love, she is quick to let you know just how “SoCal” she has become: “a vegetarian, gluten-free yogi, and healed from a lot of physical and emotional trauma.” she says proudly, “I am now happier and healthier than ever and it feels like I belonged here the whole time.” California will do that to you, even if you hail from another wonderful city like Paris!

Long known as a mecca for songwriters of all stripes, Molly Malone’s has the perfect atmosphere and ample stage space for Becca’s 7 piece electric band, complete with trumpet, alto flute and tenor sax. Lenny Kravitz, Michelle Shocked and many more have played this legendary Fairfax venue since it opened its doors in 1969, down the street from Becca’s current mid-city crib. Her set will be Friday September 4 from 9 to 10pm, cover is $10 & learn more HERE.