While I was thrilled to hear that One Starry Night, a one night only benefit at The Pasadena Playhouse, will return for its 2nd year in a row, it does sadden me it will once again, be a charity event to raise awareness for Amyotrophic Lateral Sclerosis (ALS). While I am thankful that no one I love is affected with ALS, it is a devastating disease. ALS, often referred to as “Lou Gehrig’s Disease”, is a progressive, neurodegenerative disease that affects nerve cells in the brain and the spinal cord. People with ALS lose the ability to walk, talk, speak, swallow and eventually to breathe, while their five senses and, in most cases, their minds continue to function normally. The average life expectancy of a person with ALS is two to five years from time of diagnosis.

However, with recent advances in research and improved access to medical care, people with ALS are living longer, more productive lives. Thus, why continuing to raise much-needed funds are pivotal! Thankfully, so many people are devoted to getting us to that cure, & a wonderful way to show your support is head out for a night on the town at The Pasadena Playhouse, Monday, April 20th!

When I was invited to attend last year, I didn’t know what quite to expect, but we were treated to was a wonderful, hilarious, heartfelt variety show with musical acts, comedy sketches & a brilliant surprise performance of Feed the Birds, by no one else but Richard Sherman (Co–songwriter of Mary Poppins). Which was extremely special to me as I had just shown Michael Mary Poppins for the first time, & we’d also seen Saving Mr. Banks. 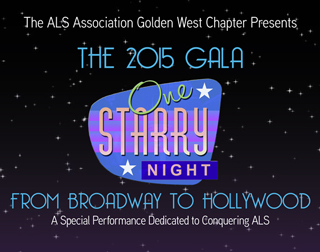 “I am very pleased to once again open the doors of our beautiful theatre to our friends at The ALS Association Golden West Chapter, and to all who are dedicated to the fight to end ALS,” said Sheldon Epps, Artistic Director of The Pasadena Playhouse. “I look forward to a wonderful evening of masterful entertainment to support this vital cause. The Playhouse is thrilled to welcome the artists and audiences who will lend their generosity to ONE STARRY NIGHT.”

In a joint statement, co-producers Juliana Hansen, Melissa Verdugo, and Jonathan White offered these comments. “We are so delighted, proud and grateful to grow our wonderful partnership with The ALS Association Golden West Chapter. The 2nd ONE STARRY NIGHT will be bigger and better, with spectacular entertainment from celebrity artists to benefit a deeply important cause, which is very dear to our hearts. We know that supporters and audiences will have an unforgettable evening on April 20th at The Pasadena Playhouse, while generously providing crucial support in the fight to end ALS.”

In addition to the performances, the Golden West Chapter will also be presenting several special honors to notable supporters of the ALS community. The Essey Awards are the Golden West Chapter’s highest honor, named for one of the Greater Bay Area Chapter’s founding members, Richard Essey. These awards are presented annually to esteemed members of the ALS community for their outstanding efforts in research, philanthropy and public awareness.

Tickets will sell out fast, so get yours now by clicking HERE & lets help END ALS together! xo