Only 7 Performances Left of Guys & Dolls at The Wallis! 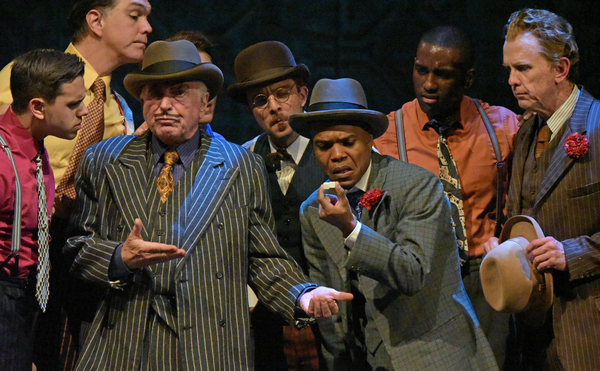 The Wallis Performing Arts Center in Beverly Hills is currently performing the Frank Loesser 1950 classic, Guys and Dolls, under the exquisite direction of Tony award winner, Mary Zimmerman.  After getting a glimpse at their rehearsals, I was thrilled to return to see the cast & crew I had interviewed & seen come to life among exercise outfits & Starbucks coffee’s, dazzle on stage to a sold out audience that raved & roared for the two & a half hour production.

While the plot was written to take place in the 1930’s, Zimmerman has cleverly down played that fact to give the musical a timeless feel, which definitely threw someone like myself as I have seen many productions of Guys & Dolls, but, nonetheless, Zimmerman makes this work & is very subtle, which includes a near non existent back drop; instead of the traditional scene of Manhattan gracing the stage behind the cast, Zimmerman’s spectacle, which premiered earlier this year at The Oregon Shakespeare Festival in Ashland, is simply a dark blue, brick-inspired scene…that is somewhat capable of magic as it acts as a window for us to view cast members throughout the show.

Something that resonates with me, & I think always will for Guys & Dolls, is the strong characters within this show. Anytime I have seen Guys & Dolls, I always overhear many of the attendees make some kind of comment concerning that it is a sexist show. While I completely understand why that is often said I would not necessarily;y have associated Guys & Dolls with such labels.

When I watch Guys & Dolls, I am often struck with what positive, beautiful body types of all kinds are represented among Miss Adelaide (Robin Goodrin Nordi) & her Hot Box Girls. I would leave inspired after each performance when I first worked with the show 10 years ago, because of that reason, & did, once again, last week. When chatting last month with Zimmerman, she commented that Adelaide is one of her favorites of the show as she is who she is, from beginning to end.

While most of the stars re-discover, or discover, themselves, for the first time, Adelaide is not afraid to be who she is; she is a feminist for her era. Making a living while she hopes that one day her 14 year engagement to Nathan Detroit (Rodney Gardiner) becomes a union.

Then, there is the adorable, blossoming affair between Sky Masterson & Sarah Brown; a world known gambler & a missionary sister from The Save A Soul Mission. While their date to Havana is supposed to be due to a bet, much more is happening below the surface, & stars Kate Hurster & Jeremy Peter Johnson play out their chemistry to near perfection. Hurster, with a classically trained Shakespeare background, nails Sarah Brown as she unfolds the layers to the part as the plot progresses; you truly are floored to see Sarah go from the prissy sister to drunk in Havana & in-love with Sky. We see her doubt herself as she foolishly falls for Sky, then thinks he does not feel the same.

Guys & Dolls is always a great production, The Wallis has proved that theirs is definitely a must-see for LA. Theres only 7 more performances left so grab your tickets HERE before its too late! xo