Something very close to my heart is the poverty & homelessness I see every single day working in & around Los Angeles. Since I was young, I always can remember my parents helping homeless people & those stuck sitting on street corners by ordering them a burger meal if we were near a fast food place. I also have always had such a vivid recollection of being quite little, & my Dad offering some of my Red Vines to a man in an alley after we’d seen 101 Dalmatians at the movie theatre.

My parents never really said anything, or gave me a lecture that I am lucky I don’t have a life like some people, etc. This was truly a case where actions spoke much more than words, & I try to be like my parents are in my grown up years; another time night I recall was waiting with a friend for a cab in San Francisco after a concert; a woman asked me for diaper money & my friend seemed turned off, asking afterwards why I gave her $10, I explained to him that woman could easily be me, & how awful would it be not to give someone a few dollars after I had just blown so much money on myself for a Smashing Pumpkins concert & vacation?!

Recalling these memories make me happy for local shelters like My Friends Place, a Hollywood-based organization founded in 1988, the mission of My Friend’s Place is to assist and inspire homeless youth to build self-sufficient lives. Over the past 25 years, the organization has grown from a group of volunteers serving meals from their cars once per week into a thriving, professionally staffed social service agency serving nearly 1,500 youth experiencing homelessness per year from their Hollywood facility. With the incredible support of countless community partners, they’re able to offer broad-ranging, high-impact services that help some of the most vulnerable young people move toward greater stability. 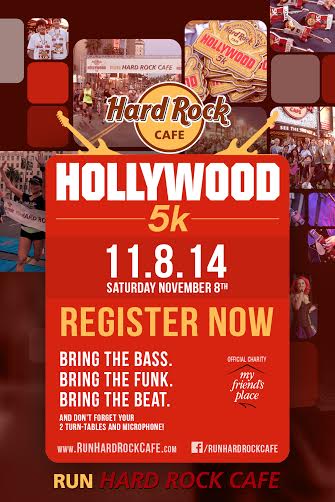 The reason I share these stories & information about My Friends Place with you, is because The Hard Rock Cafe is shutting down Hollywood Boulevard for the second year in a row for its Run Hard Rock Cafe 5K to benefit My Friend’s Place!

Registration is now underway for the race which will take place on Saturday, November 8, giving runners, walkers and rockers alike the chance to run alongside the imprints of legends down the famous Hollywood Boulevard while simultaneously giving back to the local community via My Friend’s Place.

Once again, Hard Rock Cafe is partnering with Jive Live entertainment, Los Angeles’ premier authority on race production, to produce the USA Track & Field (USATF) Certified Course race. The inaugural race sold out with more than 2,400 runners on the 3.1 mile course and organizers anticipate strong demand this year as well. Run Hard Rock Cafe is the only 5K race to shut down the world-renowned Hollywood Boulevard, offering locals and tourists an opportunity pass by iconic Hollywood locations such as the TCL Chinese Theater, El Capitan, Jimmy Kimmel Live, Ripley’s Believe It Or Not, Capitol Records, W Hollywood, and the Pantages Theater undisturbed by motorized vehicles.

Proceeds from every registration fee will benefit My Friend’s Place. Their headquarters on the race course make their location and Hollywood community affiliation an important part of Run Hard Rock Cafe 5K.

“Hard Rock Cafe is doing something wonderful for this vulnerable youth community and we are honored to be included in this event for the second year in a row,” said Heather Carmichael, Executive Director of My Friend’s Place. “This year we hope to raise even more money to benefit the homeless youth and drive attention to homeless youth crisis.”

The exciting course will feature live entertainment in the forms of local musical acts and DJs. Runners will be encouraged to dance and rock ‘n’ roll their way to the finish line. Continuing the celebration of music, the 2014 Run Hard Rock finisher medal features a gold metallic drum set hung off an exclusive Hard Rock lanyard. Hard Rock Cafe Hollywood on Hollywood Boulevard will be open post race for celebratory food and drinks.

I am so honored that I will be in attendance of a Media preview & tour of My Friends Place in October. Following that afternoon, expect to see a follow-up showing you even more of what this non-profit is doing to help homeless youth get on their feet. In the meantime, I would be thrilled if you would consider giving a donation, or even registering to run in the race! 😉 Get all the info HERE & stay tuned. xo