UMPO’s Jurassic Park is Born to be Wild

Living your truest life is sexy. Encouraging those around you to laugh and smile is inspiring. These are just a couple of the things that went through my mind this past weekend as I got to attend opening night of the Un-Authorized Musical Parody of Jurassic Park at LA favorite, Rockwell Table and Stage.

I’ve been no stranger to the UMPO series and Rockwell for awhile now. Yet, I will never forget my first impression of this bustling, buoyant Los Feliz staple back when I saw their rendition of the Devil Wears Prada. Lively and unique,  I was seated at a cozy table directly next to what seemed to be a stage. Very intimate, I realized the front entrance was reserved for the cast and crew. Thus, entering from the alley! When the show began and UMPO alum, Drew Droege, hit the stage as Meryl Streep’s Miranda Priestly. Singing Vogue, no less. I knew I had a new favorite place.

I was reminded once again just how much I love the UMPO series after seeing their latest (and maybe greatest), Jurassic Park. Their cast and crew are artists at their best. You cannot leave an UMPO show without feeling happy. This to me, is because their dedicated team are making their dream reality as they entertain adoring audiences.

Based on the blockbuster Steven Spielberg film, Jurassic Park the story of paleontologists Alan Grant (Keir Kirkegaard) and Ellie Sattler (Lesley McKinnel). Along with mathematician Ian Malcolm (Michael Thomas Grant. Who is tre chic, and just goes by Goldblum), they’re among a select group chosen to tour an island theme park populated by dinosaurs created from prehistoric DNA. While the park’s mastermind, John Hammond (Owain Rhys Davies), assures everyone that the facility is safe, they find out otherwise when various ferocious predators break free and go on the hunt.

UMPO’s parody is completely that. A homage to the film in the best spoof way possible. One of the biggest questions I have been asked since I saw this production is, how do they parody the dinosaurs?

In complete UMPO form, of course. Our T-Rex was played by none other than UMPO creator and writer of the Jurassic Park re-telling, Kate Pazakis. While I knew first hand just how gifted Pazakis is, I had yet to see her perform in one of her shows. Her powerful, belting voice was made for the stage. As the T-Rex, Pazakis sent the audience into ‘roars’ (get it?) as she carried her dinosaur headed puppet around the venue and brought the house down with songs like Led Zeppelin’s the Immigrant Song.

As Samuel L. Jackson’s Dr. Arnold, Dedrick Bonner had the house howling for more as he sang his way through his role. Along with leading a priceless ensemble rendition of It’s Raining Men, Bonner nails the role and has created a dynamic chemistry among his co-stars.

UMPO fave EK Dagenfield once again proves he, like the rest of the Jurassic Park cast, was born for the stage. Dagenfield has been one of my favorites to see in the UMPO series since I was first introduced to him as Janis Ian in their version of Mean Girls. Playing three roles, respectively, Dagenfield may not physically bring to mind the underdog character of Nedry (played in the film by Wayne Knight) but, nonetheless, makes it work with endless laughs. UMPO has also given the Ohio native a chance to show his versatility as he effortlessly switches between Newman (AKA Nadry), Gennaro and Muldoon.

Our team of paleontologists are brought to life with plenty of tongue in cheek jokes and throwbacks to Jurassic Park in Lesley McKinnell and Keir Kirkegaard as Dr. Grant and Ellie. Their chemistry was spot-on from our opening number as they got us hooked in immediately with their Welcome to the Jungle/Walk the Dinosaur medley. While I am not the first reviewer to point this out, McKinnell’s stage presence and voice shines on her solo number of Pink’s What About Us.

Playing Hammond’s grand kids, we are in for double trouble as Lana McKissack (Lex) and Amanda Kruger (Tim) also play dinosaurs to accompany Pazakis’ T-Rex in several scenes.
Much like with Dagenfield, UMPO players often play multiple parts yet it does not get old nor seem repetitive. 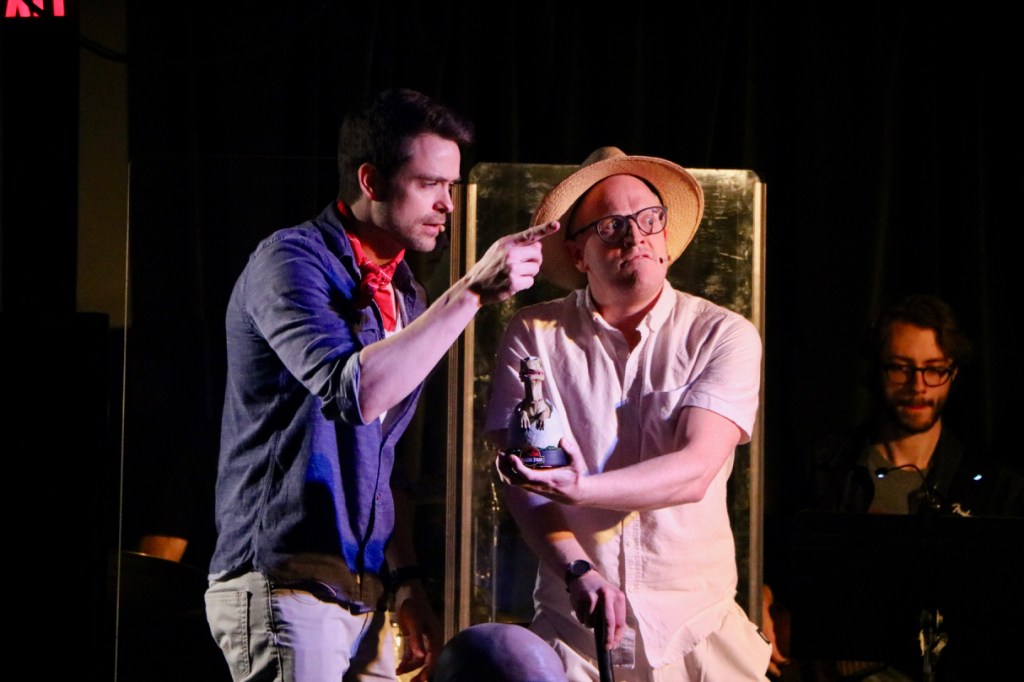 One thing I can recall from the hype of Jurassic Park growing up, is Dr. Hammond. I recall thinking Jurassic Park sounded ‘dumb’. Why would an old guy think it’s a good idea to have real dinosaurs at an amusement park? What an airhead, I would think. Davies’ portrayal builds on Hammond’s’ ‘head in the sky’  attitude to his dream and you can imagine what a crack up it was that he carries around the same hatching raptor desk statue that is in my office!

Rockwell staple, Michael Thomas Grant, is yet another shining star in Jurassic Park. He builds on all of the suave ways of Jeff Goldblum’s Ian Malcolm. In true UMPO fashion, Grant made it known several times throughout the course of the show that you can also could also catch him doing “mouth stuff” the following Sunday in his Rockwell solo show of the same name. A triple threat, Grant is a natural on stage and had all of us ladies and gents loving his flirtatious cover of Born to be Wild.

As someone who has only seen the Jurassic Park film once, I can tell you first hand that you do not need to know everything about it in order to have a fantastic time at this production. Rockwell Table and Stage has created one of the best hidden gems here in LA. Whether you’re a local or visiting, don’t miss UMPO’s latest and historic (or, pre-historic) un-authorized musical parody of Jurassic Park! Book your tickets HERE.

(*Disclosure: I was a guest of the UMPO series on behalf of this review. All opinions are my own.)