Looking for Love in All the Wrong Faces!

You probably think this is going to be a rant ‘n rave on dating a la past posts of mine but…nope! The headline above is actually the tagline for a new indy film I would like to tell you more about, called Halloween Party.

Little did I know that one of the first connections I would make when I moved to SoCal would be when I answered a Craigslist ad (haha) for a film maker looking for marketing interns for a project. This turned out to be Linda Palmer, whom also lived, at the time, around the corner from me! Since our first meeting in January 2010, she has become a great friend of mine as well as her family & friends. It’s always a good time when Linda & her partner, Mark, throw a party…like….their Halloween Party!;) 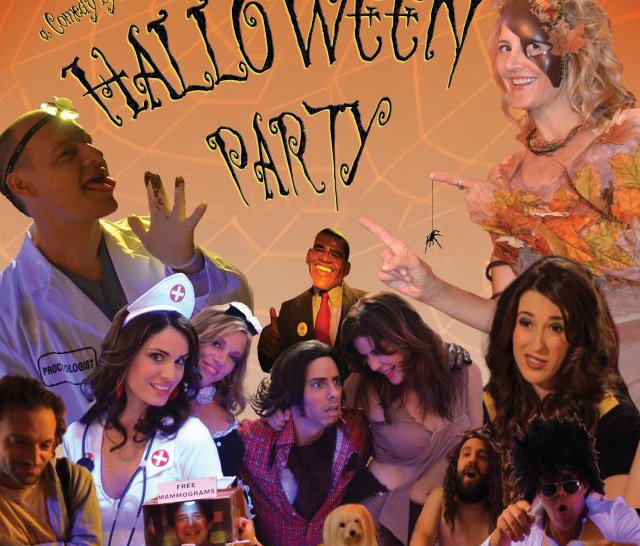 I always laugh when I recall July 2011…I had been hired as a Producer’s Assistant for Linda’s newest venture; undertaking a 10 day overnight film shoot inside her home for HP. The plan from the get-go was for me to have some kind of a role in the movie….”Now, I don’t want you to take this the wrong way”, said Linda in her office, “But, I was thinking about you playing Stripper Ho!”–WTH?!?! My immediate thought was, no way. ME? WHY ME?! But, then the more Linda talked about the costume, comedic vision, I got to thinking, why the hell NOT me?! & I accepted. Maybe you read my post of things I am proud of a few months back about how awesome it was to play that crazy role;)

Halloween Party is loosely inspired by Linda & Mark’s parties held on the most deceptive evening of the year. In the film, Ben & Julie(Chris Pentzell & Christine Blackburn) are hosting the event & Ben conjures up the idea to have cameras throughout the house to spy on everyone…even getting the assistance of Cecil B. Demille to help out! They encourage single gal pal, Erin, to come. Despite having dated most of the sleazy men there, including Donny the Werewolf (Played by improv genius, David Banks), Erin shows up yet makes friends with Mason…another guest there solo & dressed as a homeless man…but is he REALLY homeless?;) Erin’s ‘naughty’ friends seem to think so & try to discourage her from hanging with him. We also get a glimpse into the lives of Cole & Penny, the dream couple of Orange County…who actually hate each other, Charly & Grace (Played by Jennifer Popagain & Skyler Cooper, two actors I just love), an adorable couple thinking about starting a family & a fortune-teller who seems to come & go at all the right (or wrong?) times. Many other colorful, talented faces are featured in HP. I feel truly honored to have worked with so many talented, wonderful people who felt like a family for those 10 long nights.

Halloween Party premiered for a WEEK LONG RUN! at The Art Theatre in Long Beach on their famous 4th Street Retro Row last evening, I would love to hear that you checked it out. There is adult language & content & is rated R. If you like American Pie, you will love Halloween Party. It will be available on DVD October 31st, & there’s a KICK ASS soundtrack to go with the film, too. To get more info & order them, check out the web-site!