Evan Sanders, best known among us bloggers as ‘The Better Man Project’, has overcome much & accomplished even more in his short life thus far…Athlete, Fisherman, Lover, Fighter, Self Proclaimed Social Media Nerd, Author, Music Entrepreneur, Traveler….its a hard question to ask, but I had to know what was next for him….and the answer was enlightening….

He wanted to get the ketchup out of the bottle!

On a beautiful, brisk Sunday morning in Evan’s homeland of Palo Alto, CA, I had the pleasure of meeting with him at The Grill & Creamery along with MizMeliz to get to the nitty ‘n gritty of what Sanders has learned. The humorous comeback regarding the 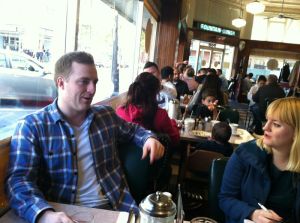 ketchup was right after our food had arrived, & the poor guy was encountering mucho difficulty trying to get some on his Hash Brown Pie (I had never heard of this, either….it looked delish, fyi!). This is the essence of Evan. When you ask what is next, he does not tell you of trips, ideas, plans, worries. He is attempting to literally live within each moment gifted to him. I found that answer inspiring….”Tomorrow is a disease” he explains, “There should be no ‘Eventually’. We need to live now”.

Since beginning The Better Man Project, which is his daily chronicles at getting to 100% within himself (& is now past 1,000 days on the journey) he has definitely gone through many transformations. As a bodybuilder, who is no doubt very fit, its hard to imagine what he went through following an accident in High School that left the star athlete bed-ridden & nearly paralyzed. “I went through Middle School & High School trying to be someone else. I played sports, but even that was complicated.” He went onto explain advice he has learned that is perfect for anyone: That we need to “Hand pick our friends. The ones that will be there til the day we die. You need to build a personal All-Star team”.

As a Blogger myself (duh!), I enjoyed hearing about how far his project has come. When it began, his roommate, Russell, was his only follower. He now has thousands. With a publish goal date of February 9th for the e-book to pay homage to the 2nd blog-iversary, it hit Amazon even sooner on January 30th & while he does not have numbers yet, they should be excellent as it’s already been ranked in the website’s 100 list.

Through the book, he has been able to earn the credentials & wisdom to begin his next journey as a life coach. If you follow my blog or know me, you know that those close to me & myself have had my own ups & downs, because of that, I felt obligated to ask him his opinion on medically treating some battles, as I feel there are times your own will & strength even need some help to get you out the door to chase your dreams; “You need to do whatever is right for you” I was a little relieved to hear him say, “”Its your plan, your life. What is right for me may not be right for you, whats right for you, may not be right for me.” We went on to discuss many great individuals who have touched the lives of millions, without even finishing school, & facing their own obstacles to get where they wanted. Think no further than The Beatles or Steve Jobs.

One of my final questions was completely for my readers. I wanted him to tell me what I would like YOU to know about him, especially if this is your first time hearing of Evan Sanders & The Better Man Project; “It has become an obsession, a deep focus to turn darkness into light. While there are no details (per se) in the book, it’s because without details, you can better focus on your life.” And, another quote to keep in mind, Evan’s motto for life that came after countless hours of work & writing, is:
Love. Passion. Never Quit.

For more information on The Better Man Project & to purchase the book (Only $4.99!), visit the project here. 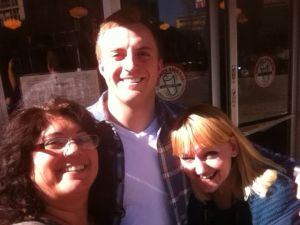 Blog Interview Evan Sanders Life Quotes Self Help Self Improvement self worth Steve Jobs The Beatles The Better Man Project What should I do with my life?