While I am a casual fan of Green Day, when Los Angeles’ DOMA Theatre Company invited me out to see their current production of the band’s 2004 hit album, American Idiot, I didn’t know quite what to expect when we arrived at the very intimate, small Met Theatre, where DOMA performs. I was quickly reminded that looks can be deceiving as this rock & roll opera turned Broadway hit, could arguably be the best rock show currently in Hollywood.

Telling the story of Johnny (Jess Ford), Tunny (Chris Kerrigan) & Will (Wesley Moran), 3 friends unsatisfied with life in a suburban town, we quickly see behavior & definite patterns that hit much too close to home & reminds us of the world we’re living in as we see disillusioned youth searching for an answer, yet, do they even have the question?
Whatever they’re looking for, they are turning very much to alcohol, sex, drugs, rock & roll & 7-11 as they watch TV channels filled with political promises & banter, reality stars & their role models being either those that join the military or drink too much then go to rehab. These are just a few examples of “The American Idiot”. 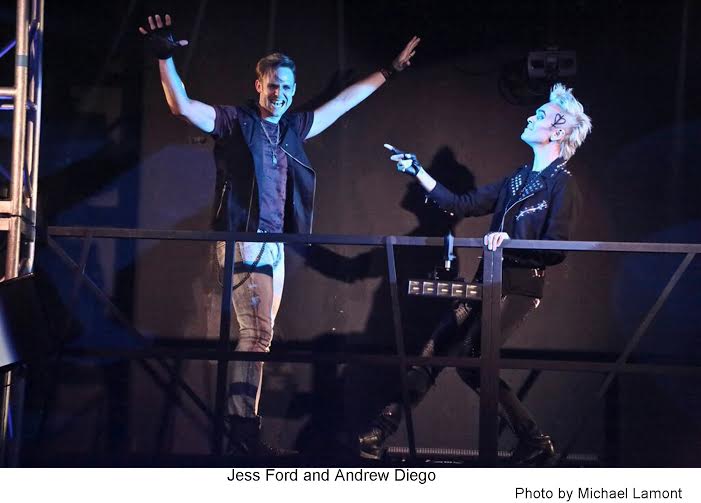 When the boys decide to bust out & head to the city, they might think that they’re having “the time of their life” yet, dark days & heartbreak lay  ahead. While Will must stay behind as he has just been told from his significant other, Heather (Jackie Bianchi), he’s about to become a father, Tunny ends up feeling so numb that an ad for the Army lures him in to enlist & Johnny remains the most breezy as he meets a crazy, carefree drug dealer, St. Jimmy (Andrew Diego), who quickly gets him loaded up on heroine, leading to an addiction & risking his new-found girlfriend, Whatshername (Renee Cohen), as Johnny refers to her.

Ford as Johnny is a force to be reckoned with. A character with endless energy that goes from sexually charged & full of hope, to indulgent & bitter. Once St. Jimmy get the best of him, it might be the perfect wake-up call to face laying in the bed you make; there is only so long you can blame others for your choices, as these characters learn.

Kerrigan & Moran as Tunny & Will, respectively, are perfect examples of what can happen when we’re filled with angst & resentment. While Will shuts down due to the sudden responsibilities he has to face, it was especially heartbreaking to watch Tunny’s path unfold; it is definitely much like the news post 9-11 & as we went to war with Iraq. 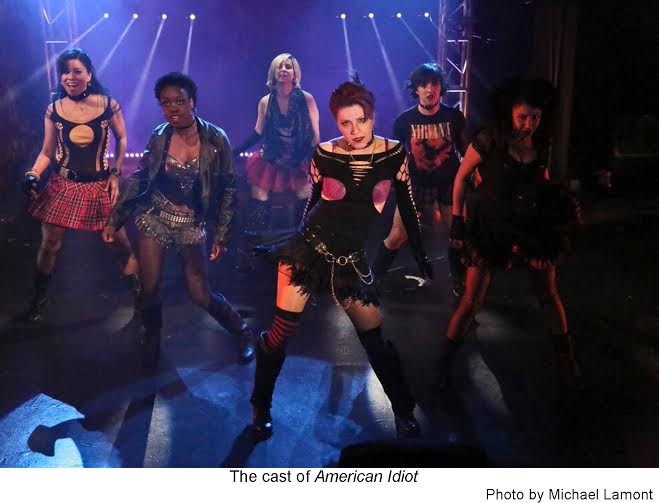 Andrew Diego as St. Jimmy, combines so much flash, drama & zest to his role as the instigator; a larger than life character who is non-stop, he flies & jumps all around so quickly, that it is easy to see how he tempts Johnny to his escape. As Green Day’s Billie Joe Armstrong himself has played St. Jimmy on Broadway, I am sure he would approve of Diego’s portrayal!

Mind you, while American Idiot was originally created by 3 men, there is in no way any lack of the opposite sex in the musical; Cohen & Bianchi are beautiful in their roles as disenchanted girlfriends, while I especially appreciated Bianchi as Heather; while Heather did not have much to say in the show, she was so present in her scenes that I felt her actions & presence spoke louder than words.

Cassandra Nuss as The Extraordinary Girl was stunning, as well. Shortly after her introduction to Tunny, a beautiful ballet performance soon turns into an aerial piece that was effortless, graceful & strangely enough, tied in very well to American Idiot & the scene. 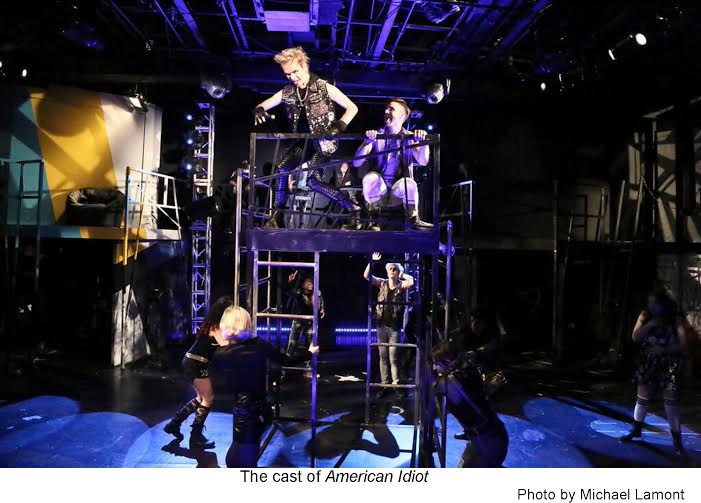 Then, there is the music & dancing that is the heart of American Idiot. Some of Green Day’s most beloved hits, Holiday, Boulevard of Broken Dreams & Wake Me Up when September Ends, are staples of the show while ‘…Broken Dreams’ is orchestrated into a subtle number that progresses as a violinist accompanies Jess Ford & the band on it. The live band on stage adds the bonus vibe to creating a real rock concert is happening before your eyes.

While the MET stage may appear smaller compared to a Broadway sized venue, the cast & crew literally utilize every aspect of their stage; making it a spectacle that demands your attention no matter where you turn. It made me want to watch American Idiot again as I am sure I missed something!

American Idiot is playing to sold out crowds through August 2nd, head on over to their web-site HERE to secure your tickets NOW. Due to the success of the show, they have even added Thursday performances. xo

(*Disclosure: I was provided with press tickets to see American Idiot on behalf of this review. All opinions are my own.)